There’s been a plethora of fairy tale re-imaginings lately, some good, some not so much. It got me thinking: is this a new trend? While it seems that retellings are much more popular recently, there are always books that reinvent older fairy tales and myths. Here are a few that I’ve read, complete with my unsolicited thoughts on each: 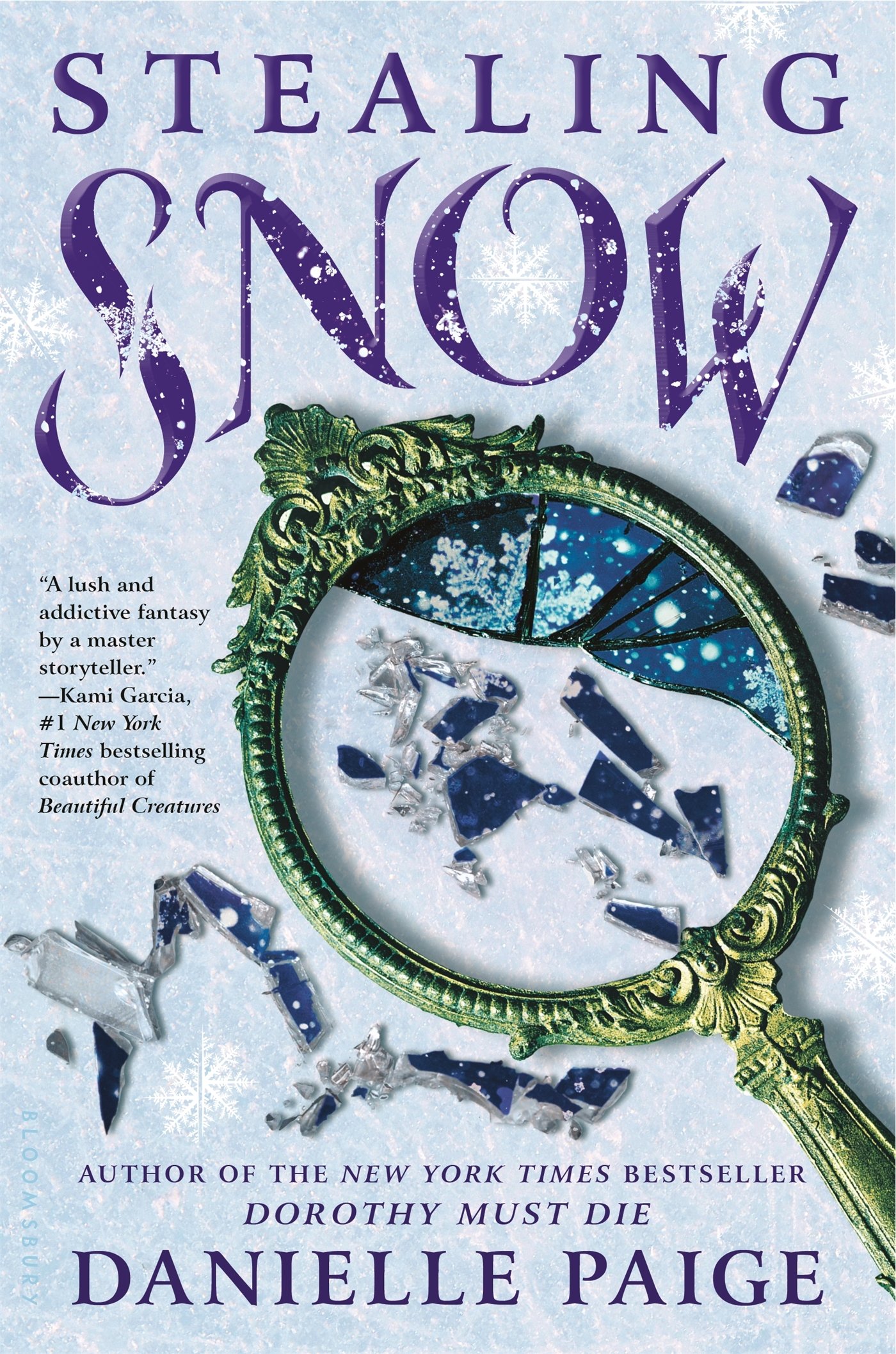 Stealing Snow by Danielle Paige: This reinvention of the Snow Queen was good, but not amazing. I think I would have liked it better if it had been longer, giving it some extra time for setup. That being said, it’s still one worth picking up.

Seventeen-year-old Snow has spent her life locked in the Whittaker Psychiatric Institute, but deep down, she knows she doesn’t belong there. When she meets a mysterious new orderly and dreams about a strange twisted tree, she realizes she must escape and figure out who she really is.

After Snow breaks free and races into the nearby woods, she stumbles into icy Algid–her true home–with witches, thieves, and a strangely alluring boy named Kai, none of whom she’s sure she can trust. As secrets are revealed, Snow discovers that she’s on the run from a royal lineage she’s destined to inherit, a father more ruthless than she could have imagined, and choices of the heart that could change everything . . . including Snow’s return to the world she once knew.

With Algid’s fate resting in her hands, will Snow embrace her destiny, even it means paying the ultimate price? (taken from Amazon)

Daughter of the Forest by Juliet Marillier: This is a re-imagining of The Six Swans. I remember really enjoying the book, but it’s been quite a while. I think the time is ripe for a reread! It’s much more of a full-on fantasy book, which is always a plus.

Lord Colum of Sevenwaters is blessed with six sons: Liam, a natural leader; Diarmid, with his passion for adventure; twins Cormack and Conor, each with a different calling; rebellious Finbar, grown old before his time by his gift of the Sight; and the young, compassionate Padriac.

But it is Sorcha, the seventh child and only daughter, who alone is destined to defend her family and protect her land from the Britons and the clan known as Northwoods. For her father has been bewitched, and her brothers bound by a spell that only Sorcha can lift.

To reclaim the lives of her brothers, Sorcha leaves the only safe place she has ever known, and embarks on a journey filled with pain, loss, and terror.

When she is kidnapped by enemy forces and taken to a foreign land, it seems that there will be no way for her to break the spell that condemns all that she loves. But magic knows no boundaries, and Sorcha will have to choose between the life she has always known and a love that comes only once. (taken from Amazon) 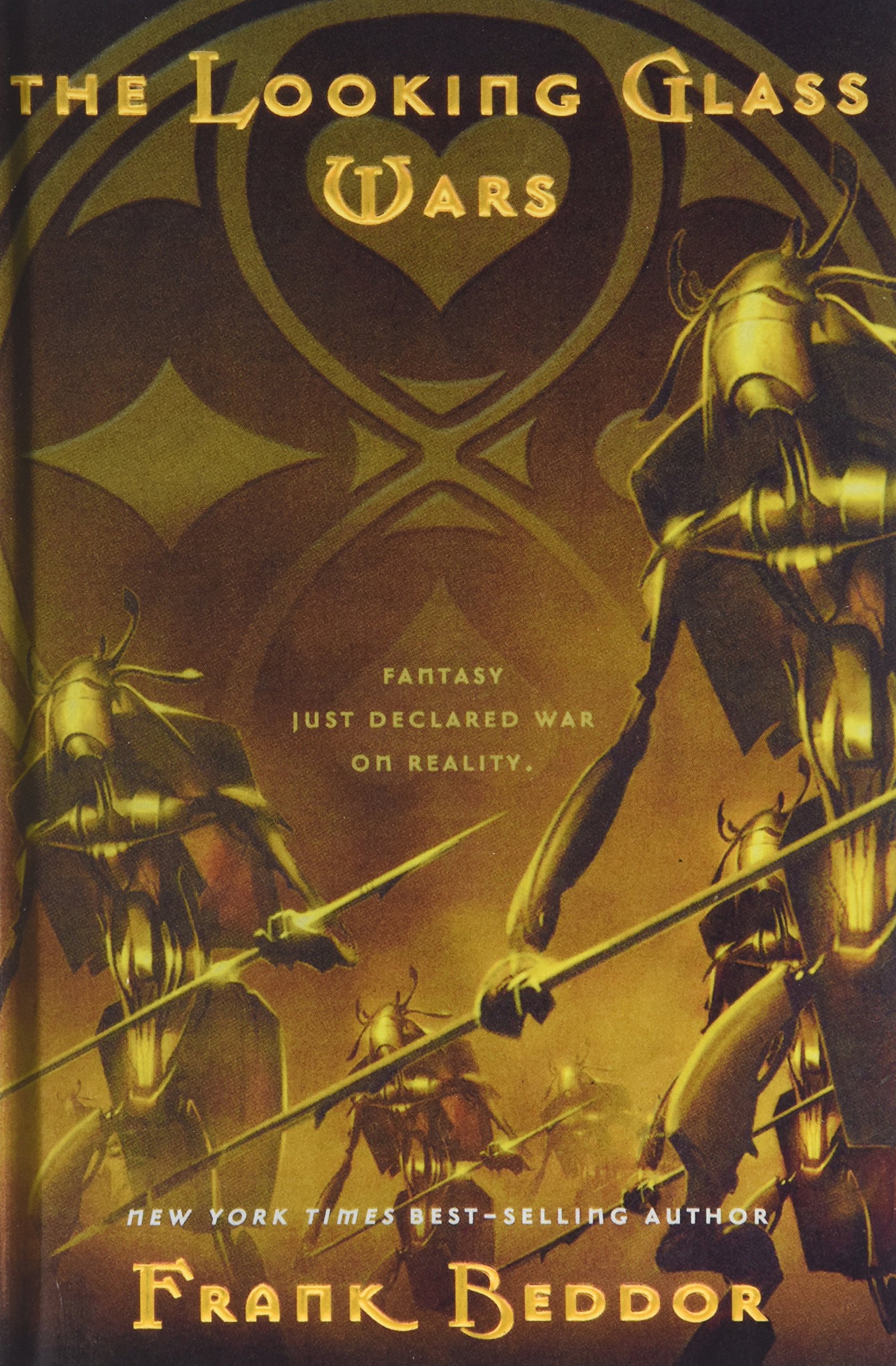 The Looking Glass Wars trilogy by Frank Beddor: Very loosely based on Alice’s Adventures in Wonderland (not technically a fairy tale, I know), these books are madcap fun.

The Myth: Alice was an ordinary girl who stepped through the looking glass and entered a fairy-tale world invented by Lewis Carroll in his famous storybook. The Truth: Wonderland is real. Alyss Heart is the heir to the throne, until her murderous aunt Redd steals the crown and kills Alyss’ parents. To escape Redd, Alyss and her bodyguard, Hatter Madigan, must flee to our world through the Pool of Tears. But in the pool Alyss and Hatter are separated. Lost and alone in Victorian London, Alyss is befriended by an aspiring author to whom she tells the violent, heartbreaking story of her young life. Yet he gets the story all wrong. Hatter Madigan knows the truth only too well, and he is searching every corner of our world to find the lost princess and return her to Wonderland so she may battle Redd for her rightful place as the Queen of Hearts. (taken from Amazon) 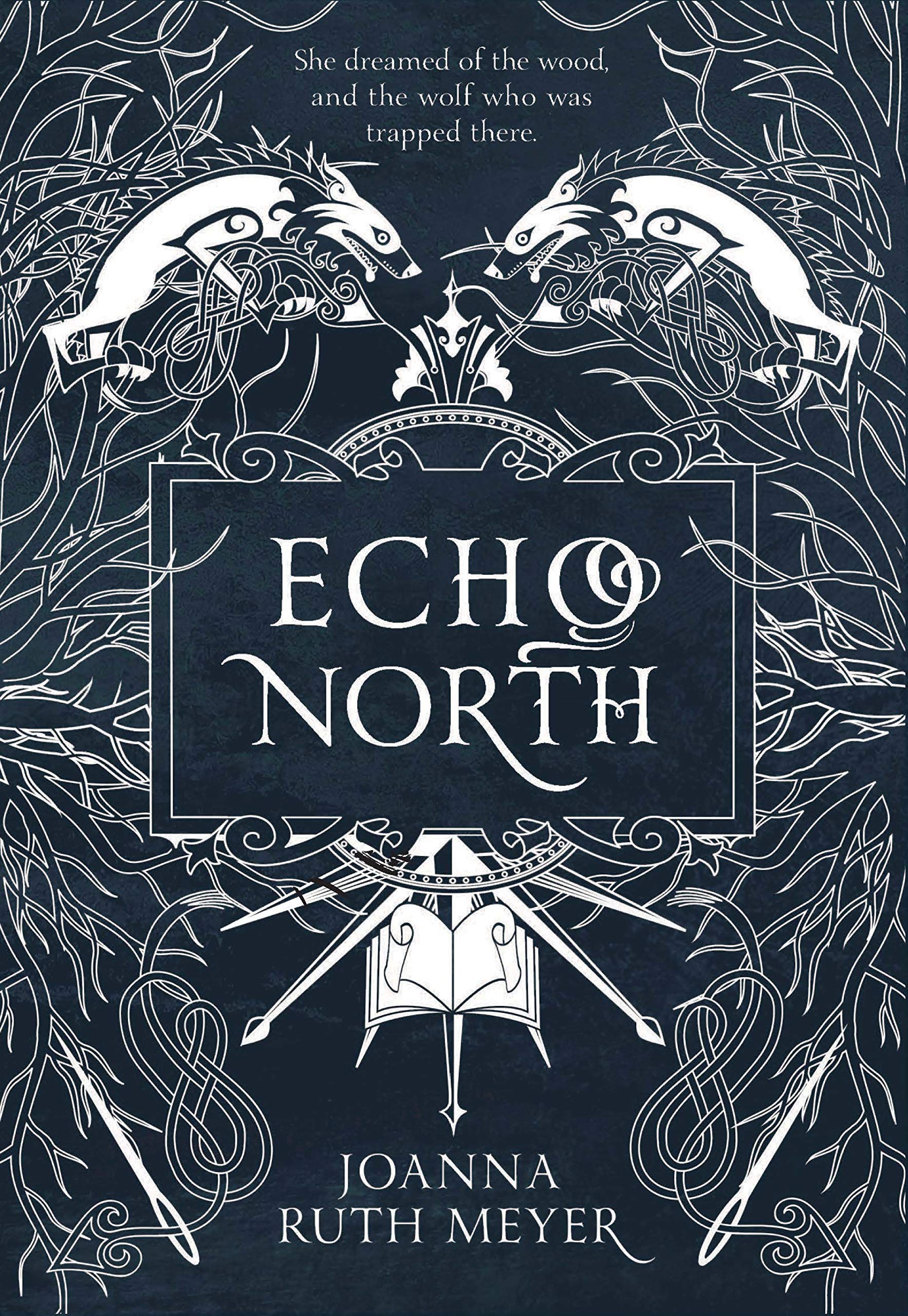 Echo North by Joanna Ruth Meyer: I love, love, love this re-imagining of East of the Sun, West of the Moon! Everyone needs to read this! Lovely and atmospheric, it’s not one to miss.

Echo Alkaev’s safe and carefully structured world falls apart when her father leaves for the city and mysteriously disappears. Believing he is lost forever, Echo is shocked to find him half-frozen in the winter forest six months later, guarded by a strange talking wolf―the same creature who attacked her as a child. The wolf presents Echo with an ultimatum: if she lives with him for one year, he will ensure her father makes it home safely. But there is more to the wolf than Echo realizes.

In his enchanted house beneath a mountain, each room must be sewn together to keep the home from unraveling, and something new and dark and strange lies behind every door. When centuries-old secrets unfold, Echo discovers a magical library full of books- turned-mirrors, and a young man named Hal who is trapped inside of them. As the year ticks by, the rooms begin to disappear and Echo must solve the mystery of the wolf’s enchantment before her time is up otherwise Echo, the wolf, and Hal will be lost forever. (taken from Amazon)

East by Edith Pattou: This is another retelling of East of the Sun, West of the Moon. It’s a lot more simply told than Echo North, possibly intended for a younger reader base, but it’s still a good one.

Rose has always felt out of place in her family. So when an enormous white bear mysteriously shows up and asks her to come away with him, she readily agrees. The bear takes Rose to a distant castle, where each night she is confronted with a mystery. In solving that mystery, she finds love, discovers her purpose, and realizes her travels have only just begun.

As fresh and original as only the best fantasy can be, East is a novel retelling of the classic tale “East of the Sun and West of the Moon,” told in the tradition of Robin McKinley and Gail Carson Levine. (taken from Amazon) 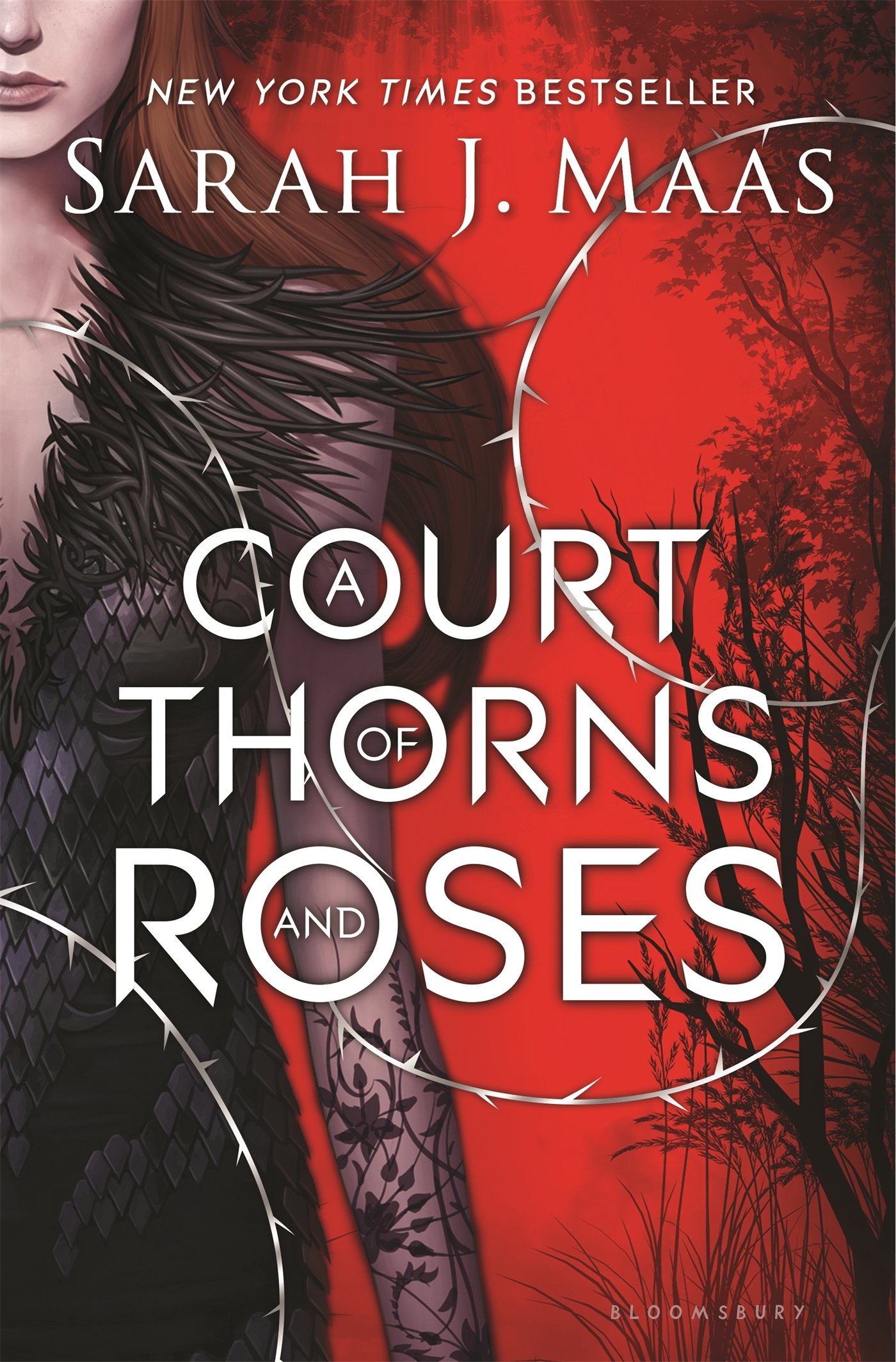 A Court of Thorn and Roses by Sarah J. Maas. I’ll be honest: I really don’t like this one at all, but I’d be remiss if I didn’t include this one on the list. Based loosely on Beauty and the Beast, as well as The Ballad of Tam Lin, it’s much more of a romance than I enjoy. I also found that some parts bordered on the icky for me. This is an unpopular opinion, though. Most readers really enjoy this series.

When nineteen-year-old huntress Feyre kills a wolf in the woods, a beast-like creature arrives to demand retribution for it. Dragged to a treacherous magical land she only knows about from legends, Feyre discovers that her captor is not an animal, but Tamlin–one of the lethal, immortal faeries who once ruled their world. (taken from Amazon)

Eaters of the Dead by Michael Crichton: This is another book that’s not based on a fairy tale, exactly. It’s based on Beowulf. It’s so well done, though! If you enjoy this book, watch The 13th Warrior, adapted to screen from this book. It’s held up well over time.

The year is A.D. 922.  A refined Arab courtier, representative of the powerful Caliph of Baghdad, encounters a party of Viking warriors who are journeying to the barbaric North. He is appalled by their Viking customs—the wanton sexuality of their pale, angular women, their disregard for cleanliness . . . their cold-blooded human sacrifices. But it is not until they reach the depths of the Northland that the courtier learns the horrifying and inescapable truth: he has been enlisted by these savage, inscrutable warriors to help combat a terror that plagues them—a monstrosity that emerges under cover of night to slaughter the Vikings and devour their flesh . . .(taken from Amazon) 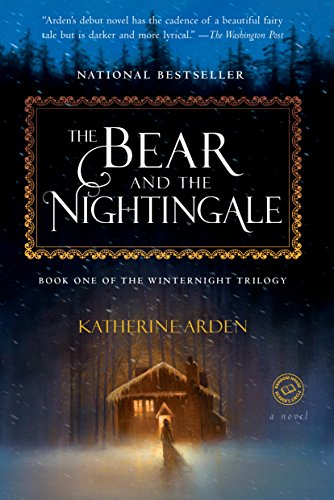 The Bear and the Nightingale by Katherine Arden: Inspired by Russian fairy tales, this book is  beautiful and engrossing. I highly recommend it.

Winter lasts most of the year at the edge of the Russian wilderness, and in the long nights, Vasilisa and her siblings love to gather by the fire to listen to their nurse’s fairy tales. Above all, Vasya loves the story of Frost, the blue-eyed winter demon. Wise Russians fear him, for he claims unwary souls, and they honor the spirits that protect their homes from evil.

Then Vasya’s widowed father brings home a new wife from Moscow. Fiercely devout, Vasya’s stepmother forbids her family from honoring their household spirits, but Vasya fears what this may bring. And indeed, misfortune begins to stalk the village.

But Vasya’s stepmother only grows harsher, determined to remake the village to her liking and to groom her rebellious stepdaughter for marriage or a convent. As the village’s defenses weaken and evil from the forest creeps nearer, Vasilisa must call upon dangerous gifts she has long concealed—to protect her family from a threat sprung to life from her nurse’s most frightening tales. (taken from Amazon)

Cinder by Marissa Meyer: This is a steampunk re-imagining of Cinderella. I have tried multiple times to read it, and for some reason I just don’t enjoy it. I don’t know why: by all rights it should be right up my alley. Give it a go: then tell me what I’m missing so I’ll stick with it. Ha ha!

Humans and androids crowd the raucous streets of New Beijing. A deadly plague ravages the population. From space, a ruthless lunar people watch, waiting to make their move. No one knows that Earth’s fate hinges on one girl. . . .

Cinder, a gifted mechanic, is a cyborg. She’s a second-class citizen with a mysterious past, reviled by her stepmother and blamed for her stepsister’s illness. But when her life becomes intertwined with the handsome Prince Kai’s, she suddenly finds herself at the center of an intergalactic struggle, and a forbidden attraction. Caught between duty and freedom, loyalty and betrayal, she must uncover secrets about her past in order to protect her world’s future. (taken from Amazon)

Agnieszka loves her valley home, her quiet village, the forests and the bright shining river. But the corrupted Wood stands on the border, full of malevolent power, and its shadow lies over her life.

Her people rely on the cold, driven wizard known only as the Dragon to keep its powers at bay. But he demands a terrible price for his help: one young woman handed over to serve him for ten years, a fate almost as terrible as falling to the Wood.

The next choosing is fast approaching, and Agnieszka is afraid. She knows—everyone knows—that the Dragon will take Kasia: beautiful, graceful, brave Kasia, all the things Agnieszka isn’t, and her dearest friend in the world. And there is no way to save her.

But Agnieszka fears the wrong things. For when the Dragon comes, it is not Kasia he will choose. (taken from Amazon)

While this list is in no way complete, here are some that I’ve read. Which retellings have you read? Did you enjoy them? What are some I’ve missed that I need to read?

5 thoughts on “Tale As Old As Time: New Spins on Old Stories”