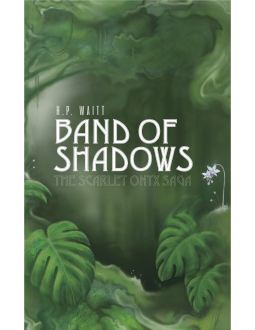 A compelling new fantasy epic from debut author H.P. Waitt! Scarlet has no idea who she is. And after spending nearly a decade in the foster system, she has never quite felt like she belonged. In fact, for the first seventeen years of her life she didn’t even know her last name. Night after night, she is plagued by a dream of a strange-looking door. Until finally, she stumbles upon that very door and is thrust into another realm, a place unlike anything she has ever seen. Now alone in the unknown world of Avalon, a land where the plants have healing powers, the birds play games, and the trees hide the most valuable secrets, Scarlet meets Morgana, the island’s enigmatic leader who unveils the truth: Scarlet is a Faye, a powerful race of people whose population was nearly decimated during the Shadow Wars. But Morgana didn’t bring Scarlet to Avalon solely to keep her safe. Unsure who to trust or what to believe, Scarlet learns that the truth isn’t always what it seems. There is a new war brewing, and when it arrives, Scarlet will make a shocking discovery about her past from the most unlikely of sources, and everything Scarlet has ever known will be thrown into question. (taken from Amazon)

Thank you to NetGalley for providing me with this in exchange for my honest opinion.

Oh dear. This book had such potential. I mean, the premise sounded fantastic! Faye? Possible betrayals? Can the person who wrote the description write that book please? Because this book was not that book.

First, there was the issue of the dialogue. It wasn’t believable at all. It was clunky and stilted, which immediately dulled my interest in the book. Admittedly, it’s been a while since I’d qualify as a “young adult” but I remember my friends and myself saying a lot more than “Ugh!” or “Arrgh!” to each other. Eventually, the random noises became a little less common, but damage done.

Also, there’s the door. Scarlet has a repeating dream about an odd door– so she decides to research it? Um…aside from that not being anyone’s first reaction after dreaming about a door, how on earth did she plan on “researching” based solely on an image in her mind of a door? There’s nothing to go on. Thank goodness for coincidences, the door showing up right away! Sigh.

Avalon did look cool, and was described well. I thought that was what the author did best. I’m wondering if maybe she just needs to have more confidence in herself and her writing. It’s possible that she’ll improve with future endeavors.  However, for me, this book was just “meh”, and this is not an author I’d read again.