Skip to content
wittysarcasticbookclub Fiction, Horror, On the Edge of Your Seat! Mysteries and thrillers, Uncategorized May 27, 2019 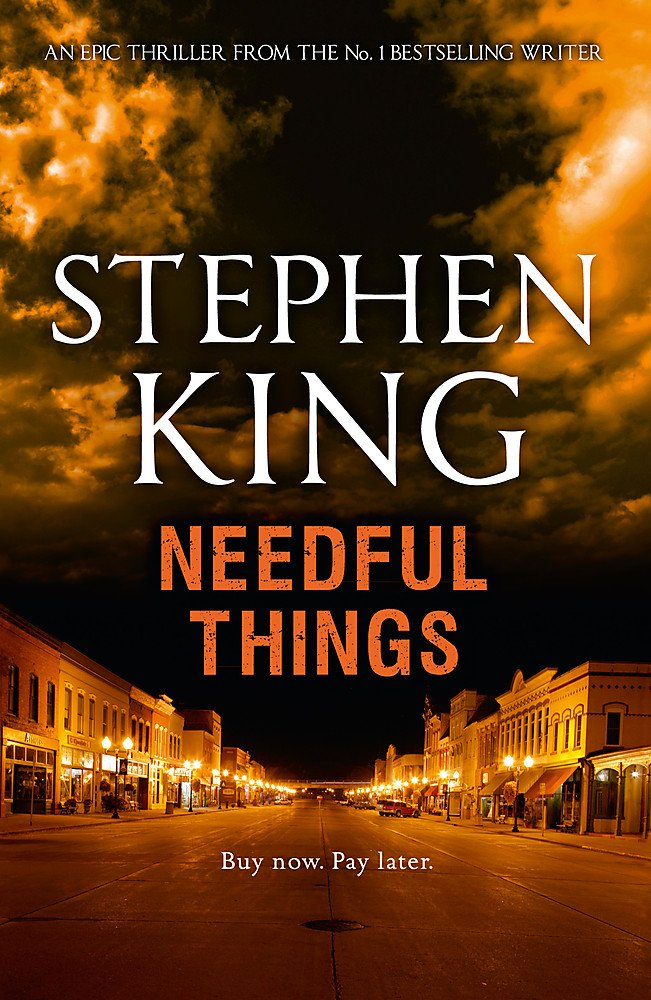 I’ve read a few Stephen King books in the past, but not too many. To be honest, my opinions on the books I had previously read ranged from indifference to dislike, so I was a bit uncertain on how I’d feel about this one. I decided to read Needful Things because I loved the show “Castle Rock”, which is loosely based on Stephen Kings’ works.

Needful Things takes place in Castle Rock, Maine, which is the setting for several of King’s stories. It’s a sleepy little town. At least, it would be if it hadn’t been the site of some seriously bizarre violent happenings over the years. Leland Gaunt, a charming man, comes to town and opens a store called “Needful Things”. It seems to be a curio shop, or an odd antique store. People from the town start coming in and, luckily for them, find the thing they most want.

Leland Gaunt sells things for an intriguing price- what the shopper can pay in cash plus one prank. Just a harmless little prank. Except, it’s Castle Rock, Gaunt isn’t who he seems, and suddenly these pranks have less than harmless consequences.

The idea is fascinating, Not because someone who deals in more than currency is a new idea; it’s not. But someone who uses pranks as currency is very original and the way the story progressed is unique. I’ve never heard any version of the Peddler who deals in that sort of trade. So, right away, I was intrigued.

Stephen King is an incredibly talented writer, no one will deny that. At times, I did feel like there were too many background characters, and there were a few parts that I think could have been condensed (for example, there were multiple Elvis Presley sexual fantasies, which seemed redundant). Overall, though, I really liked it. By the end, the story was barreling along at a breakneck pace and taking me with it.

I especially liked Sally because she had so much to lose. More than anyone else in the book, her “needful thing” was really needed. Leland Gaunt was truly terrifying, while being an incredibly complex character. I loved the way things ended between Gaunt and Pangborn (I won’t say, don’t worry).

There was one scene in particular that was extremely difficult for me to read; I ended up a little sick to my stomach. Be aware that Stephen King never pulls punches. His books are not for the faint of heart.

All in all, I enjoyed it. The snowball effect was fascinating, the ending was unexpected, and I got chills during the epilogue. If you enjoy Stephen King, or horror in general, I’d recommend this book.