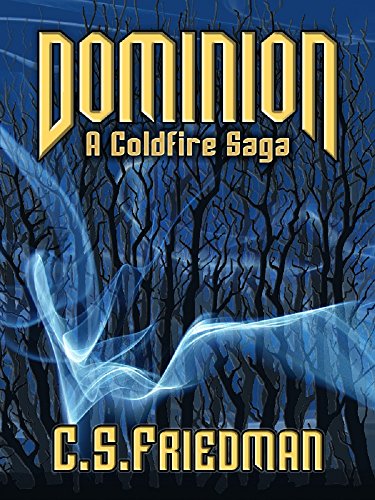 I love The Coldfire Trilogy so, so much. I recommend it constantly. It’s one of those amazing trilogies that seems to be sadly underrated. Imagine my surprise, then, to learn that there’s a short prequel that I hadn’t read. That needed to be remedied right away!

This book follows Gerald Tarrant as he heads to the forest for the first time, the center of extreme power. His story also interweaves with that of Faith, a holy knight who had set out to destroy an unholy creature.

If I’d written this post right after I finished the book, it would have been a rave. But I had time to think first and my opinion has shifted slightly. I still think it’s a well-written book, but… with stipulations.

While I thought this book was great, it won’t do much for those who haven’t read The Coldfire Trilogy already. It’s very short and means much more if you already have an understanding of the world and storyline. If you’ve read the trilogy, you’ll be thrilled to read more about Tarrant and to get a glimpse of his arrival at the forest. If you haven’t read it, you’ll probably read it, shrug, and move on.  So, that being said, let me tell you why you should read the entire Coldfire Trilogy.

Over a millennium ago, Erna, a seismically active yet beautiful world was settled by colonists from far-distant Earth. But the seemingly habitable planet was fraught with perils no one could have foretold. The colonists found themselves caught in a desperate battle for survival against the fae, a terrifying natural force with the power to prey upon the human mind itself, drawing forth a person’s worst nightmare images or most treasured dreams and indiscriminately giving them life.

Twelve centuries after fate first stranded the colonists on Erna, mankind has achieved an uneasy stalemate, and human sorcerers manipulate the fae for their own profit, little realizing that demonic forces which feed upon such efforts are rapidly gaining in strength.

Now, as the hordes of the dark fae multiply, four people—Priest, Adept, Apprentice, and Sorcerer—are about to be drawn inexorably together for a mission which will force them to confront an evil beyond their imagining, in a conflict which will put not only their own lives but the very fate of humankind in jeopardy. (taken from Amazon)

I’ve never read a series like this. It’s incredibly unique, and the effort the author went through to develop every little bit of the world is breathtaking.  I love the idea of a natural power (fae, in this world) , manifesting people’s thoughts and fears into physical form. Add to that some amazing characters (my favorite is Tarrant, but the priest is pretty darn interesting as well), and a complex plot, and this book series had me hooked. In fact, I liked it so much that I’ve read it multiple times.

Another wonderful thing about the series is that as it goes on, each character evolves. They don’t just stay in stasis. Goals have to change, and disappointments have to be weathered.  As the series continues, the price of living in a world with unchecked wild power becomes more evident.

I’m a big fan of the gothic feel that permeates the book. It’s understated, but the darker atmosphere highlights the dangers the characters face and does so much to explain the harsh environment without dragging the reader through a bunch of boring exposition.

I really don’t want to say too much and give anything away, but if you enjoy sci-fi of any kind (this one borders between sci-fi and fantasy, oddly enough), read this series.