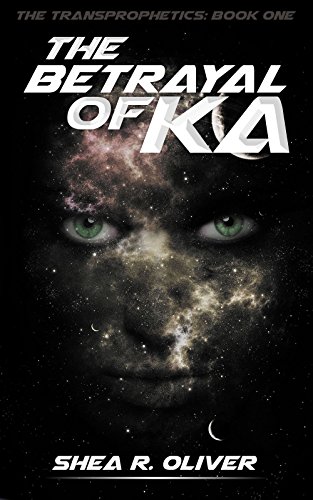 As the spaceship secretly lands on Earth, Ka’s mission is clear: find and kill Transprophetics. His shipmates think of him as a killer. On his home planet of Koranth, he is considered a murderer. Haunted in his dreams by the boy whose life he stole, Ka struggles to define who he really is.

A girl in a temple in Thailand. A boy kidnapped in Mexico. Both can do the impossible. Both can move objects with their minds. These two Transprophetics pose grave risks to the Donovackia Corporation as it plans its invasion of Earth.

With a blade in his hand, Ka’s decision to kill, or not, will reverberate across the galaxy. (taken from Amazon)

Thank you to the author for providing me with this book, in exchange for an honest review.

This is a tough one for me to review, since I did not finish it. There was quite a bit of sexual assault in this book, which I try desperately to avoid. It ended up being too much for me, so I had to set this one down. Be aware: this book is gritty, disturbing, and very, very harsh.

It is also well written. While I can’t speak to how the story came together or ended, I can tell you that Shea Oliver created a fully realized universe. He paid special attention to details that I’ve found are normally glossed over.

Of the characters I’d met up to my stopping point, not one of them was likable. There was a lot of political maneuvering and stepping on of toes. In some ways this felt like a sci-fi Game of Thrones-type of book. If you can handle the harshness in those books, then this book might very well be for you.

This book has recently relaunched and the sequel releases in September.