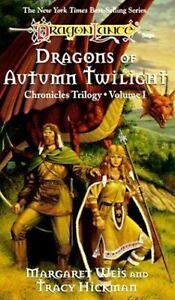 As pretty much everyone knows by this point, I love the Dragonlance Chronicles. I reread them about once a year, but this year is going to be epic because I’ll be taking part in a Dragons of Autumn Twilight November read-along! It’s being hosted by Jason at Offthetbr, which is an awesome blog. If you want to join in, check out his post here to learn how to sign up, etc. I hope you’ll join the fun!

Lifelong friends, they went their separate ways. Now they are together again, though   each holds secrets from the others in his heart. They speak of a world shadowed with rumors of war. They speak of tales of strange monsters, creatures of myth, creatures of legend. They do not speak of their secrets. Not then. Not until a chance encounter with a beautiful, sorrowful woman, who bears a magical crystal staff, draws the companions deeper into the shadows, forever changing their lives and shaping the fate of the world.