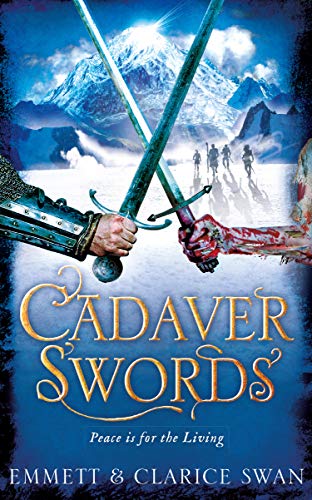 Chimber was a master grave digger and knew his business. But when the Queen of the nation of Dalmeer called out the Gravedigger’s Guild to bury thousands of citizens that had perished from a mysterious poison-laced cloud, he was not prepared for what he found. Before his very eyes, bodies thought dead began to rise up, walk, and huddle together in dark groups. Soon, an unstoppable cadaver army was laying waste to the land.

With the good people of Dalmeer under siege and the army in disarray, Chimber wants to do his part to defend his home town. But as a gravedigger, he isn’t usually needed until after the killing is done. As he watches a battle unfold from the cover of a nearby hill, an unflappable female warrior gets felled from her horse by a mob of cadavers. Risking life and limb, he slides down to the battlefield and manages to save her life.

Chimber and the warrior establish a bond and agree to journey into the Northern Wastes to find the one being that may be able to save the nation—the mysterious Medium of the Blue Mountain. But she is surrounded by a strange tribe of female ice pixies that have little interest in helping those from the southern lands.

If Chimber can convince the Medium of the Blue Mountain to join their cause and return to Dalmeer’s capital city in time, they just may save the people of the land from the bite of cadaver swords. (taken from Amazon)

Epic in scale, this was a slow read for me.  It took me a very long time to get all the way through. However, once I did, I ended up really enjoying it.

With this book, what stood out to me was the world-building. It was so incredibly creative! The setup of the geography was pretty cool. There were several islands within relatively close proximity, which made the timing more believable. I am a big fan of fantasy books that feature a journey of some sort because it allows for so many different kinds of encounters, so that was a win for me.

Climber’s buddy Jern was probably my favorite character. The relationship between the two was fun to read. I know I’ve mentioned in other posts that I don’t always like the main character, but I did enjoy Climber. It was good to read a main character that wasn’t a giant ball of angst.

The author was very judicious with his fight scenes. They were well-written, but they weren’t the crux of the story. I liked that he understood the fine balance between action and story. Many authors rely too much on one or the other.

I recommend this one to fantasy readers who don’t mind some slow set-up.