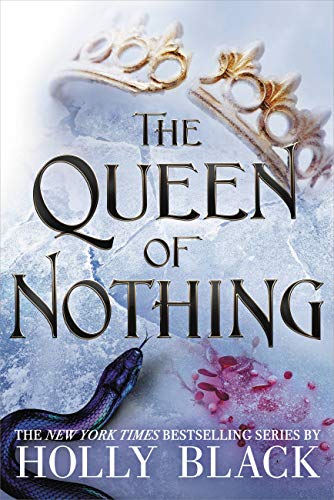 Power is much easier to acquire than it is to hold onto. Jude learned this lesson when she released her control over the wicked king, Cardan, in exchange for immeasurable power.

Now as the exiled mortal Queen of Faerie, Jude is powerless and left reeling from Cardan’s betrayal. She bides her time determined to reclaim everything he took from her. Opportunity arrives in the form of her deceptive twin sister, Taryn, whose mortal life is in peril.

Jude must risk venturing back into the treacherous Faerie Court, and confront her lingering feelings for Cardan, if she wishes to save her sister. But Elfhame is not as she left it. War is brewing. As Jude slips deep within enemy lines she becomes ensnared in the conflict’s bloody politics.

And, when a dormant yet powerful curse is unleashed, panic spreads throughout the land, forcing her to choose between her ambition and her humanity… (taken from Amazon)

**Spoilers for books The Cruel Prince and The Wicked King below**

Here’s the thing: I’ve read several other books by Holly Black. My son and I read the middle-grade Magisterium series that she co-authored with Cassandra Clare. We both loved it. I’m bummed to say that this book just didn’t butter my biscuit. Not to say that Holly Black can’t write: she’s a very talented writer. I just didn’t care for what she did with this book.

That being said, she did make a few choices that showed her writing chops. I think the best way to write this particular review is to list the things I liked, followed by the things I didn’t. Spoiler-free for this book, but it does have spoilers for the first two books in the trilogy. Here we go:

-I liked the wickedness and capriciousness of Faerie. Faeries in lore tend to range between mischievous and downright nasty, so this sat well with me.
– I enjoyed the riddles and prophecies that needed to be puzzled through. It was fun trying to figure them out before the characters did.
-The nasty critter that showed up was pretty stinking cool (that’s all I’m saying, so as not to spoil anything).

Things that didn’t work for me:

-The mush, gush, and angst. Zoinks! It became very tiresome very quickly.
– Locke is my favorite character ( I know, he’s a jerk. But he’s an interesting jerk), and I wanted to see more of him in the series, not less.
– In many places, the dialogue was so bad it was ridiculous. It tended to descend into absolute obnoxiousness any time Jude and Cardan spoke together. If they were separate, it wasn’t too bad. Again, this goes back to the mush and the gush. It just became too much for me.
– There was a lot of time spent on describing different outfits and hairstyles. I mean, a lot. And since my idea of dressing up means wearing a skirt with ye random nerdy t-shirt, I got bored long before the descriptions stopped.

I’m assuming it’s obvious at this point that this book was not one I loved. However, I’m pretty sure I’m in the minority on this one.

Have you read it? What did you think?

18 thoughts on “The Queen of Nothing by Holly Black”