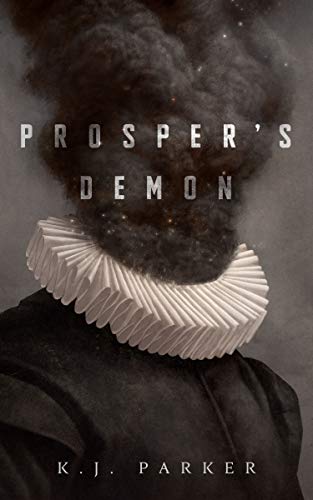 In a botched demonic extraction, they say the demon feels it ten times worse than the man. But they don’t die, and we do. Equilibrium.

The unnamed and morally questionable narrator is an exorcist with great follow-through and few doubts. His methods aren’t delicate but they’re undeniably effective: he’ll get the demon out—he just doesn’t particularly care what happens to the person.

Prosper of Schanz is a man of science, determined to raise the world’s first philosopher-king, reared according to the purest principles. Too bad he’s demonically possessed. (taken from Amazon)

Thank you to Netgalley for providing me with this book in exchange for my honest opinion. This will be available on January 28th.

This novella is…odd. I mean, really, really odd. I was originally drawn to this book by the amazing cover (okay, okay, I know: don’t judge a book by its cover. But I did, so there).  The premise is intriguing: an exorcist who has an encounter with Prosper, a self-proclaimed genius and close friend of the king, who also happens to be possessed by a very tricky demon.

The exorcist, who narrates the story,  is morally bankrupt, and extremely unlikable. Of course, he warns the reader of that right away. I liked that he was an unreliable narrator with a cynical streak. It wasn’t enough to endear me to the character or the story, however. There were too many problems.

The first problem is the length. Being that it’s very short, it needed to get going sooner than it did. The first scene was interesting, but afterward things slowed way down. I kept getting distracted from what was happening because it was moving so slowly.

Another issue I had was the fact that we never learn the identity of the narrator. That’s something that either works for you, or it doesn’t. I tend to dislike never knowing a narrator’s identity. I’m totally fine waiting until the epilogue to learn who the storyteller is, but I like to know at some point. It’s never revealed.

In many ways, the story felt incomplete. The idea was cool, and the writing had serious potential but, probably due to the shortness of the novella, it wasn’t fully realized. I would have liked this better if it was longer.