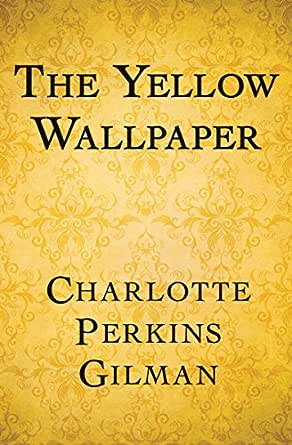 “The Yellow Wallpaper” is told as a series of journal entries written by a woman who has gone to a country manor to recover from what is assumed at this time to be postpartum depression.  Her loving husband, John, follows the recommendation of doctors of the day (he is also a doctor), and sequesters the woman so that she might rest and recover. She is not supposed to exercise or write,  instead letting repose heal her. The woman (whose name is never learned) is not allowed to leave her room, which has yellow wallpaper. As time progresses, the woman becomes convinced that the wallpaper moves and there is someone in the wallpaper trying to get out.

I really can’t accurately describe the creepy feel of this story. While it is ultimately a tale of the deterioration of the woman’s mental state (due to the absolutely absurd treatment of mental illness in the late 1800’s, when this was written), there is an eerie vibe to it. The writing is astounding. I was immediately drawn in. I can see why this story is considered a classic.

When I began the book, I thought it was odd that the color of the wallpaper was such a big deal. However, I soon found that it makes perfect sense. The metaphors found throughout are amazing, conveying the hopelessness the woman felt regarding her situation.

It isn’t a happy-go-lucky story, but it is a compelling one. And the ending! Holy terror, Batman! Gilman’s writing is excellent. I highly recommend reading this story.

25 thoughts on “The Yellow Wallpaper by Charlotte Perkins Gilman”