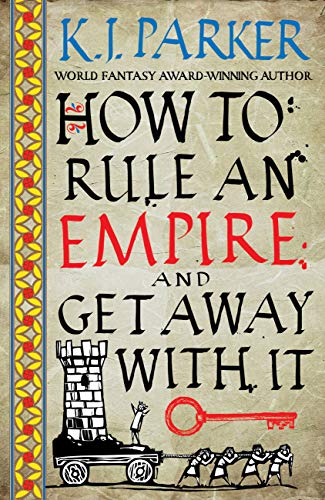 This is the history of how the City was saved, by Notker the professional liar, written down because eventually the truth always seeps through.
The City may be under siege, but everyone still has to make a living. Take Notker, the acclaimed playwright, actor, and impresario. Nobody works harder, even when he’s not working. Thankfully, it turns out that people enjoy the theater just as much when there are big rocks falling out of the sky.

But Notker is a man of many talents, and all the world is, apparently, a stage. It seems that the empire needs him — or someone who looks a lot like him — for a role that will call for the performance of a lifetime. At least it will guarantee fame, fortune, and immortality. If it doesn’t kill him first. (taken from Amazon)

Thank you to Netgalley for providing me with this book in exchange for my honest opinion. This book will be available on August 18th.

Apparently this book is a sequel to Sixteen Ways to Defend a Walled City. I had no idea and was able to understand exactly what was going on anyway, so it obviously stands quite well on its own. In fact, I’m not sure how it could possibly be a sequel at all.

Let me tell you what I thought about this book. The beginning: perfect. The middle: perfect. The end: perf – well, you get the idea. The only thing I don’t love is the ridiculously long title, and that’s just because my memory is a lousy, fickle thing. I’m afraid I’ll forget the title in a year or so, when I’m ready to reread it.

Notker is the main player in the story. He’s an actor and playwright (although he says multiple times that he’s not a writer). Through no fault of his own he finds himself pressured into playing a character that requires absolute dedication. Because if he’s less than convincing…bum, bum bum! Certain death!

The book revolves almost entirely on the development of Notker. You’d think that would get old after a while, but it never does. This book could have continued for another few hundred pages, and I would have happily kept on reading. Notker is smart, self-deprecating, and either very lucky or incredibly unlucky (I haven’t decided which yet).

For this kind of book to be engaging at all, the author would have to be brilliant. Thankfully, K.J. Parker is. He juggles characters, history, and storyline with ease. His narration is witty and funny. It’s also thought-provoking. That’ s quite a balancing act.

I love posts where I get to wax enthusiastic about a book. How to Rule an Empire and Get Away with It deserves a standing ovation. I absolutely loved it. Read this book!

15 thoughts on “How to Rule an Empire and Get Away With it by K.J. Parker-ARC Review”