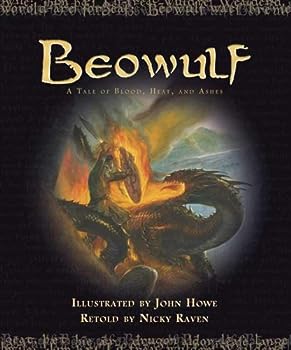 The exhilarating epic blazes to life — featuring illustrations by a lead artist on the LORD OF THE RINGS film trilogy.

“Look into the flames and let your minds empty. . . . For this is a tale of blood and heat and ashes.”

It is a tale that has been retold countless times through the centuries — and here, in an enthralling edition illustrated by a noted Tolkien artist, the mighty Beowulf is well set to capture new legions of followers. This contemporary retelling of the ancient epic — narrated with a touch of banter by the faithful Wiglaf and featuring vividly dramatic illustrations — follows the mythic hero from his disarming of the gruesome Grendel to his sword battle with the monster’s sea hag mother to his final, fiery showdown with an avenging dragon. (taken from Amazon)
I love Beowulf. I have read a few different versions of it, as well as some novels that are inspired by this epic poem. When I found out that there is a retelling that includes illustrations by the artist John Howe, I just had to have it.

Like with any classic, there are translations and retellings. This would fall more under the “retelling” category than a full-blown new translation of the original text. It flows a little bit more like a fairy tale than like the epic itself. It’s also a bit simplified, which makes it more accessible to a broader age range. It’s a fantastic retelling, but in no way can it replace the original.

To be honest, what sold me on the book are the illustrations. Most of you know who John Howe is. For those who don’t let me give a little example of his fantasy cred: he was a concept designer for The Lord of the Rings movies (his style is very apparent in the Fell Beasts), has created cover art for many fantasy novels, worked on other movies such as The Lion, the Witch, and the Wardrobe, and his art can even be found on Magic the Gathering cards (sadly, my own Magic cards don’t have his art on them). I personally also love his art in A Diversity of Dragons. And let me tell you, his popularity is well-deserved.

His art in Beowulf: A Tale of Blood, Heat, and Ashes is phenomenal. The depth and atmosphere he brought to the book elevates it from a story to something more. It drew me in. My oldest will be reading Beowulf  (Seamus Heaney’s translation) this school year and I am going to have him also read Beowulf: A Tale of Blood, Heat, and Ashes. I am positive it will deepen his appreciation for the original, as well as give him an opportunity to enjoy some stunning artwork.

I highly suggest reading this book. Actually, just buy it and add it to your collection. I guarantee you’ll want to own it.

12 thoughts on “Beowulf: A Tale of Blood, Heat, and Ashes by Nicky Raven and John Howe”