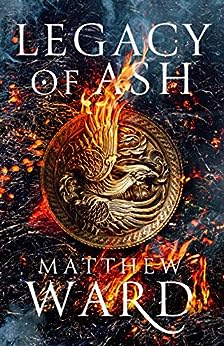 Legacy of Ash is an unmissable fantasy debut–an epic tale of intrigue and revolution, soldiers and assassins, ancient magic and the eternal clash of empires.
A shadow has fallen over the Tressian Republic.
Ruling families — once protectors of justice and democracy — now plot against one another with sharp words and sharper knives. Blinded by ambition, they remain heedless of the threat posed by the invading armies of the Hadari Empire.
Yet as Tressia falls, heroes rise.
Viktor Akadra is the Republic’s champion. A warrior without equal, he hides a secret that would see him burned as a heretic.
Josiri Trelan is Viktor’s sworn enemy. A political prisoner, he dreams of reigniting his mother’s failed rebellion.
And yet Calenne Trelan, Josiri’s sister, seeks only to break free of their tarnished legacy; to escape the expectation and prejudice that haunts the family name.
As war spreads across the Republic, these three must set aside their differences in order to save their home. Yet decades of bad blood are not easily set aside. And victory — if it comes at all — will demand a darker price than any of them could have imagined. (taken from Amazon)

Thank you to Netgalley for providing me with this book in exchange for my honest opinion. This is available now.

I’ve seen recommendations for Legacy of Ash everywhere and I am delighted to report that this book lives up to the hype. It’s a vast, complicated fantasy, the kind that sucks you in and keeps you interested. It has been compared to Game of Thrones (let’s be honest; hasn’t pretty much every new fantasy book been by now?) and I am not a huge fan of the comparison, simply because Legacy of Ash is way better.

The world is complex and fully realized. The history and politics, in particular, are realistically complicated. This falls under the epic fantasy umbrella, and I can’t think of  a more apt description for the book than “epic.” There were plots and subplots, everything woven together into an amazing narrative.

There is a ton to this book, but author Matthew Ward avoids the “info dump” that I loathe so much, instead letting the knowledge come to the reader organically. It made the experience that much more enjoyable. I got a new “wow” moment every couple of pages.

While all of the characters were layered and fantastic, my favorite was Viktor. He was kind and caring, with quite the secret. I’m not going to say any more for fear of giving something away. Suffice it to say, he was a joy to read.

I love it when a fantasy book takes all rules and throws them out the window. The fantasy genre is really only constrained by the ability of the author to use their imagination, and this book was fantastically unique. The way magic worked in this world was brilliant! Actually, the entire book is brilliant. I really should just write “whoa” and leave it at that. So….whoa!

10 thoughts on “Legacy of Ash by Matthew Ward”