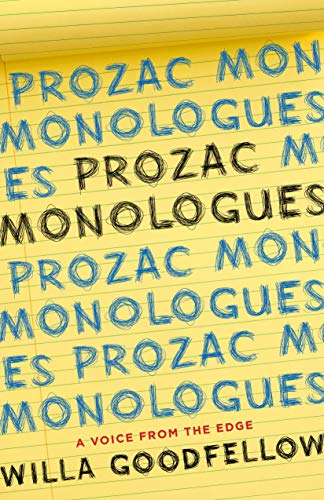 She was going to stab her doctor, but she wrote a book instead.

Years later, Willa Goodfellow revisits her account of the antidepressant-induced hypomania that hijacked her Costa Rican vacation and tells the rest of the story: her missed diagnosis of Bipolar 2, how she’d been given the wrong medications, and finally, her process of recovery.

Prozac Monologues is a book within a book—part memoir of misdiagnosis and part self-help guide about life on the bipolar spectrum. Through edgy and comedic essays, Goodfellow offers information about a mood disorder frequently mistaken for major depression as well as resources for recovery and further study. Plus, Costa Rica.

· If your depression keeps coming back . . .

· If your antidepressant side effects are dreadful . . .

· If you are curious about the bipolar spectrum . . .

· If you want ideas for recovery from mental illness . . .

· If you care for somebody who might have more than depression . . .

Thank you to Netgalley for providing me with this book in exchange for my honest opinion. This will be available for purchase on August twenty fifth.

This is a tough one for me to review, and I don’t know if I can give an honest opinion without giving a little background. I have bipolar disorder. I have a different kind than the author of this book (I have type 1 while the author says they have type 2), but they are two sides of the same coin. I have personal experience with both mania and hypo-mania, and I can say with absolute certainty that this book captures the essence of mania perfectly. I can also say that, due to the nature of the beast, this book is very difficult to follow.

First of all, I want to commend author Willa Goodfellow. Being unflinchingly honest, especially about a misunderstood mental illness, takes an incredible amount of bravery. I think that people who have gone through manic episodes will feel a sense of camaraderie, and that his book can be very beneficial.

Mania heightens emotions and sensations. It denies you sleep and makes thoughts run wild. Everything you do when in that state reflects it back later on. Things are more vivid, but they make less sense. The author’s writings during their hypo-manic episodes are fascinating from a “I’ve been there” standpoint, but- true to bipolar form -they are also frenetic. I’ve read several books about bipolar disorder that detail manic episodes, but never one written mainly during mania.

If you are reading this in search of a better understanding of bipolar disorder, be aware that this book will be challenging. It is also a valuable tool, but I would suggest reading An Unquiet Mind by Kay Redfield Jamison as well, just so you can get a more complete picture of the entirety of bipolar. I do think that the author achieved what they intended when writing Prozac Monologues, which was to give an accurate view of what bipolar mania is.

The switch between the entries written during a manic episode, and the information the author provided afterward, was often jarring. At times, it was difficult to follow the timeline and I had to go back once or twice to make sure I hadn’t missed something. However, that could have been an intentional choice, to assert the differences in thinking patterns when someone is having a manic episode.

The information itself is fascinating. I already knew a good chunk of it (I believe strongly in knowing as much as I can about a medical condition I have), but there were a few new bits of information that I’m glad I learned. One thing that was mentioned is how very long it often takes to get a correct diagnosis of bipolar. I honestly thought my diagnosis took much longer to figure out than was normal, but I guess it’s actually common to have several misdiagnoses and take years to get the right answer.

Would I suggest this book? Yes, but go into it knowing that at times it will be confusing and hard to follow. Basically, understand that this book is mania in a nutshell.