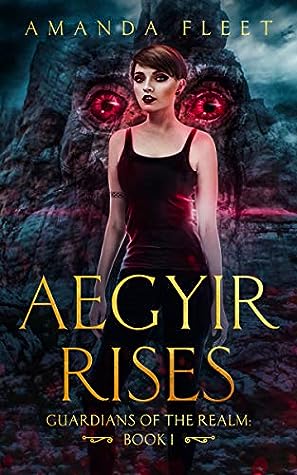 I’m extremely excited to be interviewing some amazing self-published fantasy authors throughout the month of September. Today, I am fortunate to be talking to Amanda Fleet, author of the Guardians of the Realm series. Thank you for joining me!

First, why don’t you tell me a little bit about The Guardians of the Realm series?

“It follows a young woman – Reagan Bennett – who has always felt like an outsider. She was abandoned at birth, then fostered and finally adopted, but has a difficult relationship with her extended adopted family. Throughout her life, she’s dreamed of living in another world – The Realm – where she’s a warrior called Aeron, but recently these dreams have taken a darker turn.

In Aegyir Rises (the first book of the series), lots of people start dying suddenly. Some appear to have died of flu; in others the death is sudden, but there are no marks on the body. All of the deaths are centred around the place where Reagan lives. Her dreams intensify, warning her and telling her to come home, but as far as she’s concerned, she is home. Then strange objects start appearing in her house, through locked doors, and she starts seeing things no one else can see.

An ancient creature – Aegyir – has been released, who has old scores to settle with Aeron. He is convinced that Reagan is Aeron. Can she defeat him before he destroys Earth? In order to do so, she may have to accept that she’s not who she’s always believed she is.

The second and third books of the series (“Aeron Returns” and “War”) follow Reagan’s journey after she arrives in The Realm. Is she really the warrior Aeron? Aeron was banished for treason, and if she ever returned to The Realm, she’d be hanged, so things get tricky for her!”

What first inspired you to write?

“I had stories in my head and they wouldn’t shut up and give me any peace unless I wrote them down.”

What drew you to writing fantasy?

“The stories in my head… The first book I ever wrote (still unpublished) was a medical thriller. The second (also unpublished!) was a dark romance. The third (The Wrong Kind of Clouds) is a crime novel, as is Lies that Poison (my fourth book). While I was still writing Lies That Poison, I’d already had ideas for what has eventually become The Guardians of The Realm series. I could ‘see’ various scenes and characters and when I finally sat down and worked out what it was all about, it was urban fantasy, rather than crime! I think I also felt too boxed in with writing crime. There are a lot of ‘rules’ and conventions about how police solve crimes and it didn’t feel anything like as much fun as writing fantasy! I have another crime book ‘in the laptop’ which may never see the light of day because I can’t bring myself to finish the edits on it. All the other books I currently have planned are fantasy. Maybe I’ve found my writing home at last.”

When working on a book, what comes first for you—the characters or the plot?

“A bit of both. I often have a really small inkling of some part of the plot – a demon being able to reach inside your chest and rip out all your energy – and other bits and pieces, but then the characters really start to take shape. How the plot develops (to me at least) is often dictated by what the characters are like – how they react to what happens can move the plot in different directions. If the main character avoids confrontation, there will be different choices made by them in comparison with a character that thrives on conflict. The basic ideas of the plot come first, but the details only fall into place once I get to know my characters.”

“Not all characters make it to the end of the books. I mean, after all, the premise of the book is that a lot of people are being killed and Reagan is trying to stop it. Writing death scenes and/or funeral scenes of characters I love leaves me sobbing! Every time!”

Do you have any writing quirks?

“Ooh, I don’t know… I like to have a pot of tea to hand when I’m writing and I possibly do a lot more writing by hand, certainly in the early stages of planning a book, than many others might. I also plan each scene in a notebook (by hand) and have huge scrapbooks for each novel – with pictures of buildings/scenery/characters, plus loads of character notes and planning notes. It’s always fun to look back through them and see how everything evolved from my initial ideas.”

“It’s probably easier to write a hero, but I enjoy writing villainous characters too. I do some ‘goal planning’ sheets for them – what is it they’re after and how are they intending to achieve that? Because the villain thinks he or she is a hero, right? They think they’re doing the right thing. Aegyir wants to live. Okay, others die for that to happen, which isn’t so great for them, but who’s to say who lives and who dies? What if he only killed bad people? Who determines if they’re bad or not? So, yeah, writing the ‘bad guys’ is quite often more fun than writing the heroes.”

“If I’m struggling because I’m procrastinating or just faffing about (Twtter, Facebook…), I turn off the internet and set a sand-timer. I have a 30- minute one and a 60-minute one. 30 minutes is usually enough to get me focusing. The 60-minute one is there to remind me to take a break!

If I’m struggling and the sand-timers don’t work, I go for a walk or do some gardening or something unrelated to writing, in the hope that giving my brain a bit of a break will help it to get in the zone afterwards.”

Lastly, I’m always curious? What is your favorite book (and you can absolutely say your own!)?

“Ooh, that’s like asking a parent which is their favourite child! I’ve read many Bronte and Austen several times over, but I don’t know if that makes any of them my favourite. If I had to pick one of my own books as a favourite, I would probably pick “Aeron Returns” because of what Reagan/Aeron has to face and how she overcomes things. By someone else? It would be a close call between any of Harry Bingham’s Fiona Griffiths books (crime) and almost anything by Patrick Ness, but of his books, probably the Knife of  Never Letting Go would be my top-rated one.”

She has been an inveterate stationery addict since a child, amassing a considerable stash of fountain pens, ink and notebooks during her lifetime. These have thankfully come in useful, as she tends to write rather than type, at least in the early stages of writing a book.

During her time at St Andrews, she worked with the College of Medicine in Blantyre, Malawi. While in Malawi, she learned about the plight of the many street children there and helped to set up a Community Based Organisation that works with homeless Malawian children to support them through education and training – Chimwemwe Children’s Centre. It was this experience that helped to inspire the Malawian aspects in her novel “The Wrong Kind of Clouds”.

She is also the author of the urban fantasy trilogy: “The Guardians of The Realm”, published in early 2020, and the psychological thriller “Lies That Poison”.

Amanda lives in Scotland with her husband, where she can be found writing, walking and running.

The Guardians of The Realm series:

The Wrong Kind of Clouds: http://mybook.to/TheWrongKindofClouds

Where to find Amanda:

One thought on “Self-Published Fantasy Authors: an interview with author Amanda Fleet”