No Monster’s Manual would be complete with a creature that is at least a little draconic, although once again my guest author pulled out all the stops. Virginia McClain,author of both the Gensokai series and the Victoria Marmot series, puts a new- and incredible- spin on a massive serpent, showcasing a creature from her next book,  Eredi’s Gambit!

As much as I enjoy “proper monsters” (killing machines that don’t have much motivation beyond wanting to eat the hapless adventurers unfortunate enough to cross their paths) one of my all-time favorite tropes is the monster that secretly, well, isn’t.

Even going back to when I first started playing D&D (around age 8—which was…a long time ago…shhh) I preferred it when our party ran afoul of creatures who had some motive for wanting us dead besides hunger/unexplained hatred of everything around them. Whether it was accidental, “You idiotic humans just got between me and my babies! Perish, foolish mortals!” Or intentional, “I may look like an average bugbear, but I am actually a minion of this super sneaky mindflayer that lives just around the next bend, so why don’t you chase me and see what happens?”

I was fortunate to have a DM (my big brother) who also liked giving motivations to his monsters, so we had some delightfully interesting campaigns even when we were at the age where cannon fodder monsters would have been perfectly standard. Perhaps that’s why I have always leaned into the fantasy books that question the existence of monsters that it’s always morally unobjectionable to kill.

As a kid and into my teens R.A. Salvatore’s Drizzt books were some of my favorites for precisely that reason. Despite the constraining rules of writing within the Forgotten Realms, Salvatore did his level best to question how an entire group of people could be any one thing, especially if that thing was “evil.” I loved that. I loved it so much that the first novel I ever finished a complete draft of was a pretty solid Drizzt knock off, set in the Forgotten Realms, and with my own original characters, but… let’s just say it was derivative enough that I don’t have any plans to publish it. (Though if Wizards of the Coast ever comes knocking I’d be willing to dust off that old manuscript and see what’s salvageable — just sayin’.)

These days I make my own worlds, and I delight in creating characters that look like traditional monsters but who are in fact quite pleasant once you get to know them. Meanwhile, certain perfectly average looking humans (along with the systems they create/sustain) are the true monsters. I like to keep my readers guessing. 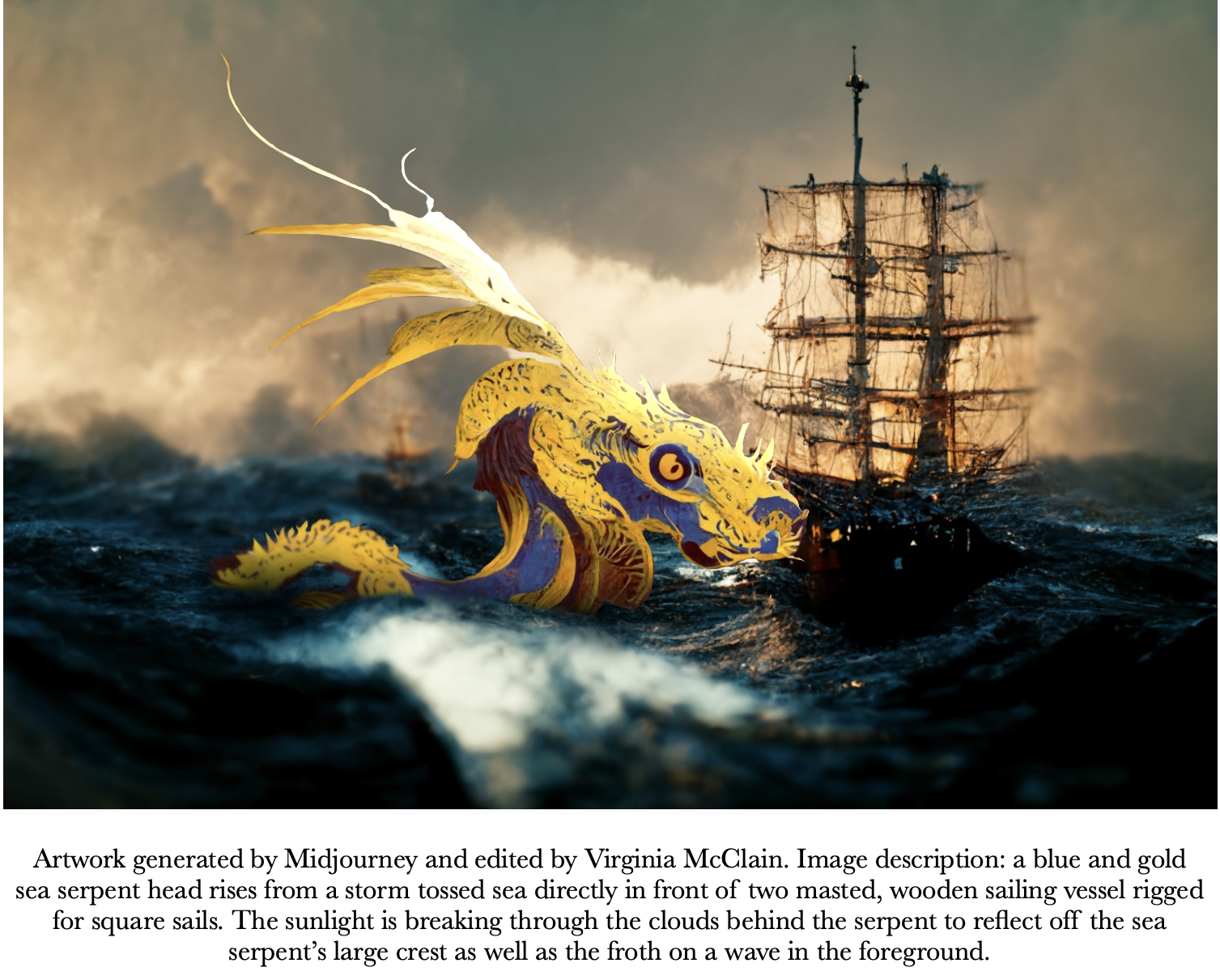 She looks intimidating. You probably would be pretty freaked out if you were on the deck of that ship she’s in front of. And, as she can’t speak any of the human languages, most of the humans she encounters take her vocalizations for the rage filled cry of a monster hellbent on destruction.

Mostly she’s just shouting out questions to try to figure out why the pesky humans are approaching her territory. Why she bothers she isn’t sure. The humans seem far too stupid to answer her, and always attack her rather than engaging in a simple conversation. Lately though, one of those pesky spirits has been convincing her friends to attack humans that aren’t even in their territory. Horribly rude.

Needless to say, when these misunderstandings lead to humans attacking her, she’s forced to defend herself. To say it doesn’t generally go well for the humans or their ships is… a bit of an understatement.

I suppose you probably want some stats for this monster who isn’t a monster though, eh? I mean, I don’t generally roll up characters sheets for anyone in my books because as deep as my D&D roots go, I prefer the freedom of creating people and worlds outside of those rule sets. That said, if this sea serpent were going to show up in a D&D campaign, she’d have stats similar to a dragon. Sea serpents in this world are essentially water dragons anyway. So very high hit points, a water breath attack, a crushing attack, a bite attack, and a tail lash. All of those would deal massive damage, but a human would have a decent chance at saving against said damage by using evasion. Bryllth (that’s her name for the purposes of this sheet) is very large, but not so fast that you wouldn’t be able to dodge if you could see her clearly. Of course, she can hide underwater, so you won’t generally see her coming unless she wants you to.

In other words, she’s bad news for the people who try to fight her. Still, she’s very much misunderstood by most humans, and certainly her first appearance in Sairō’s Claw doesn’t make her seem like the calm welcoming creature she *can* be.

But I’m delighted to report that we’ll learn more about her, her motives, and the people who are actually able to communicate with her (and thus clear up a few misunderstandings) in the next book – Eredi’s Gambit.

Here’s the character sheet I worked up for her pretending that she was a very high level dragonborn ranger. 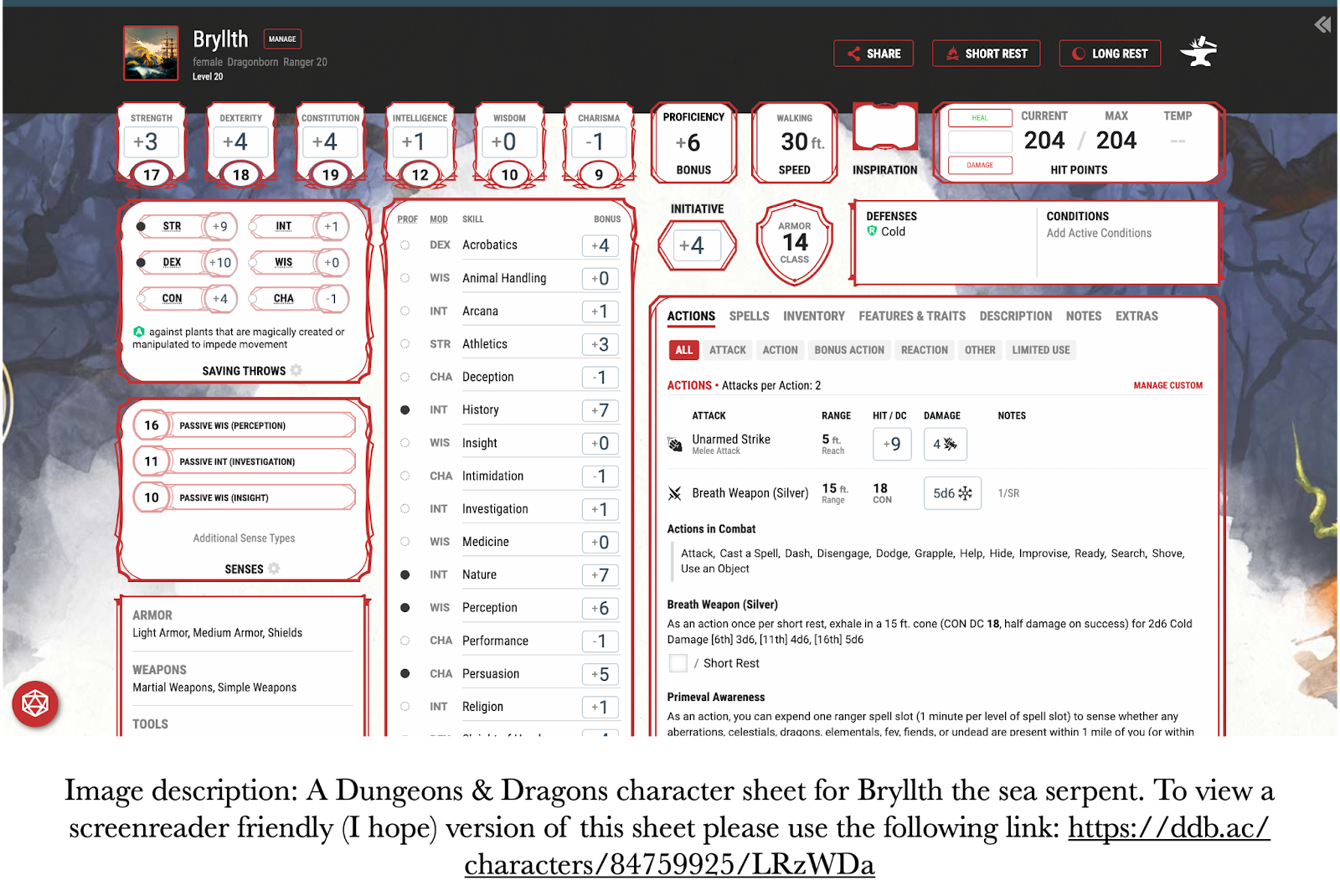 I went with a character sheet rather than monster stats as Bryllth is one of the protectors of her people and absolutely has a life of her own beyond sinking ships that show up uninvited and start attacking her without any explanation. That said, a lot of this character info is slightly off, because she’s much larger than any dragonborn, and she’s a natural swimmer with a water attack rather than a cold attack. But it was the best I could do with a free digital sheet from D&D Beyond.

I hope you’ve enjoyed learning a bit about Bryllth, and if you’d like to see her in action, you can find her first appearance in the very final pages of Sairō’s Claw. Bryllth is just one example of the way I enjoy twisting monster tropes; you can find more in pretty much all of my books.

About the Author:
Virginia McClain is an author who masqueraded as a language teacher for a decade or so. When she’s not reading or writing she can generally be found playing outside with her four-legged adventure buddy and the tiny human she helped to build from scratch. She enjoys climbing to the top of tall rocks, running through deserts, mountains, and woodlands, and carrying a foldable home on her back whenever she gets a chance. She’s also fond of word games and writing descriptions of herself that are needlessly vague.