How would you survive beyond the comfortable walls of your world?

For Starla, a struggle for power becomes a struggle for survival when she finds herself on the wrong side of the wall. Fleeing her abductors and lost in the wasteland, she faces starvation, warring factions, bloodthirsty creatures, and the endless burning sun.

And then there’s Ari… who is she really? And can she really trust this girl from the wasteland to lead her back to the city gates?

One thing’s for sure, Starla’s once privileged life will never be the same… (taken from Amazon)

Thank you to the author for providing me with this book in exchange for my honest opinion. It will be available on March 20th.

It’s been a hot minute since I’ve read a book that fits so well into the dystopian genre. The book starts behind the walls of a city. Starla, the mayor’s daughter, is warned that she is in danger. She ignores the warning and finds herself kidnapped and left on the other side of the wall, where there is nothing but wasteland and hardship. There, she meets Ari. Ari is a girl living outside the wall who reluctantly agrees to help Starla get safely back to the city.

It took me a while to get into this book. Starla annoyed the snot out of me. She felt very naive and spoiled. It made sense for her character arc, but it was difficult to read at first. Ari, on the other hand, was a fascinating character. She was tough and self-sufficient, but she also had deep compassion for others, a trait she tried to hide. She brought the story to life.

The journey back to the city covers the majority of the book, although Starla also needs to find out who kidnapped her and why. While there is action, this book focused more on themes of trust, friendship, and having the emotional strength to survive the things life throws at you.

If you enjoy dystopian fiction that focuses more on story development than on non-stop action, you’ll enjoy this book. It was an interesting and unique take on the genre, and I’ll be keeping an eye out for further books written by this author. 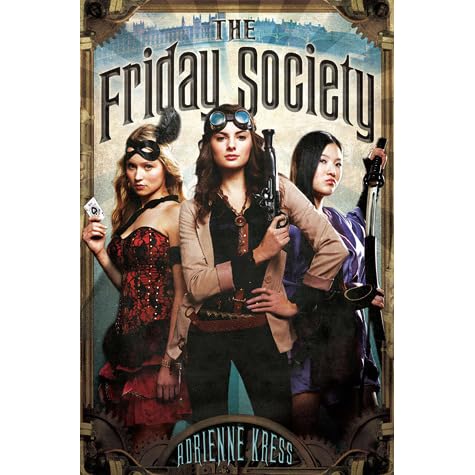 Set in turn of the century London, The Friday Society follows the stories of three very intelligent and talented young women, all of whom are assistants to powerful men: Cora, lab assistant; Michiko, Japanese fight assistant; and Nellie, magician’s assistant. The three young women’s lives become inexorably intertwined after a chance meeting at a ball that ends with the discovery of a murdered mystery man.

It’s up to these three, in their own charming but bold way, to solve the murder–and the crimes they believe may be connected to it–without calling too much attention to themselves.

Set in the past but with a modern irreverent flare, this Steampunk whodunit introduces three unforgettable and very ladylike–well, relatively ladylike–heroines poised for more dangerous adventures. (taken from Amazon)

A friend of mine loaned this book to me, and I’m so glad she did. Entertaining, a bit silly, and full of things that explode, this book is a ton of fun.

What first interested me in this book was the steampunk aesthetic although, after reading it, I’d call it steampunk light (that’s a term, right? Well, it is now). The Friday Society follows three incorrigible ladies as they attempt to solve a murder.

The plot was the weakest point in the book. That’s not to say it wasn’t there, just that the twists weren’t all that twisty, and the perpetrator was easy to call. That being said, it didn’t dim my enjoyment in the slightest. In fact, it allowed the characters to shine through.

And what characters! Some of the situations these girls got into were hilarious. It did get a bit over the top from time to time, but it never went into full-blown ridiculous mode. Nellie was the most charming of the bunch, and also a magician’s assistant. Michiko was training to be a samurai (probably the hardest part of the book for me to believe), while Cora was the lab assistant for a scientist. She was my favorite. She was snarky and sarcastic, but also competent and confident in her abilities. It was a good mix.

Another thing that I appreciated about the book was the lack of over-the-top, saccharine romance. There were ye random love interests, but they kind of hovered in the background, instead of taking the focus away from the main characters. I’m glad it didn’t descend into mooning over potential boyfriends, since I truly hate that sort of thing.

Be aware that this is one of those books with a vaguely Victorian English flair that’s layered under decidedly modern vernacular. It was a bit jarring at first, but once I stopped thinking of this book as attempting to be a period piece (it’s not), the juxtaposition worked well.

Altogether, this was a fun romp of a book. If you’re looking for a fun, fast read, this book is for you.

Have you read it? What did you think?