Thank you to Netgalley for providing me with this book in exchange for my honest opinion. This will be available on January 21st, 2021.

I’ve heard Cornell Woolrich being spoken of as the father of the crime novel, so I jumped at the chance to read The Bride Wore Black. The plot is fairly simple: there are several murders that seem unrelated, except for the appearance of a mysterious woman, whom no one seems to recognize. It falls on Detective Wanger to solve the series of cases and stop the body count.

Unfortunately, this book was more problematic than enjoyable for me. The issue is, things that are unacceptable now (or at least, they should be) were commonplace when this book was written. Things have changed a lot since 1940. Nowhere is that more evident than in The Bride Wore Black. Racism and sexism were both very much a part of this book, in the casual sort of way that shows just how “normal” it was. For example, several men “good-naturedly” (the author’s word) tried to break down a dressing room door while a woman was changing. It was written as a natural, totally okay occurrence, which immediately put me off the book. Now, I know what some of you might be thinking: it’s an older book, and I need to assume these things will be there and take it in stride. Fair point. If I were able to get past the content (which was pretty much impossible for me), my review would be pretty much what follows.

Woolrich made some odd choices. Throughout the book, the reader is given both the who and the how of the murders; the only unsolved part is the why. I’m used to reading books where the identity of the killer isn’t known right away, so this was new to me. I felt a little cheated with so much information being already given. I like the tricky aspect of trying to solve the whodunnit. That being said, the why ended up being a doozy, completely unexpected and rather sad.

If the excess of freely given information seemed odd, the methods of the killings were downright bizarre. The oddest one involved a killer disguised as a kindergarten teacher: the victim thinks it’s absolutely normal for his child’s kindergarten teacher to show up uninvited to cook him dinner while he puts his feet up and reads the paper (see what I mean about the book being problematic?) . I found myself wondering how someone who was so lacking in common sense managed to live so long in the first place. I couldn’t view the murderer as diabolical, smart, or even as much of a threat because the way the murders were committed were so incredibly weird.

I was bummed that we saw so little of Detective Wanger. There would be several chapters involving the killer, then a small aside featuring the detective. There is no opportunity to get to know the character, which was rather disappointing. At least he didn’t immediately discount the idea of a female killer based on gender.

As I’ve mentioned, the ending was surprising and creative. I could see a little bit of why the author is seen as one of the original driving forces in the detective novel genre. It felt like the precursor for later books in the genre. Unfortunately, that wasn’t enough to make this book enjoyable for me.

Needless to say, I definitely don’t recommend this book, although it could just be an issue of the reader not matching the writing. It happens. 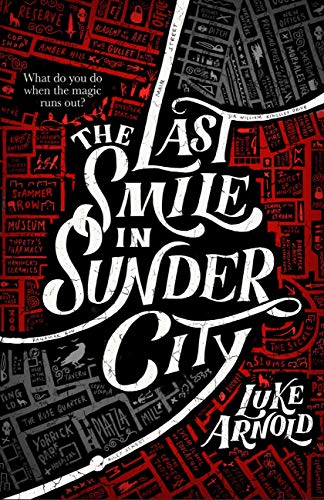 Welcome to Sunder City. The magic is gone but the monsters remain.
I’m Fetch Phillips, just like it says on the window. There are a few things you should know before you hire me:
1. Sobriety costs extra.2. My services are confidential.3. I don’t work for humans.
It’s nothing personal–I’m human myself. But after what happened, to the magic, it’s not the humans who need my help. (taken from Amazon)

Thank you to Netgalley for providing me with this book in exchange for my honest opinion. This book will be available on February 25th.

This book is noir-fantasy at its finest. It has all the trademarks of a good, gritty noir, with a dash of the fantastical thrown in for good measure. A hard-boiled P.I with a penchant for getting drunk? Check. A tragic backstory? Check. A talent for stirring up trouble and making everyone mad? Double check.

Fetch is an ex-soldier in a war that was basically humans vs. all things magical. He’s not proud of what he did during the war, or who it turned him into. He’s now a semi-talented P.I., who will take pretty much any case, as long as it pays and he’s not working for a human.

At the beginning of the book, he is hired to find a missing vampire, dead or, um…alive (?). Less dead? I honestly don’t know how to word that. Huh. Moving on. In Sunder City, either state of being is equally likely. Of course, things are brought to light that certain parties prefer stay hidden, and chaos ensues.

Now, on to the setting. Sunder City is a slum, but what a slum! The amount of detail the author put into it is astounding. I could easily picture the entire city, could hear rain drizzling, and could smell the “breakfast” being served at a certain restaurant.

Another thing I loved about the book is Fetch’s internal dialogue. It’s so deliciously old-school detective. He was perfect, the setting was perfect, the storyline was perfect. Basically, the entire book was phenomenal. The only beef I have: I have to wait to see what happens in the next book.

This one would be perfect for fans of the Dresden Files or Breaking Lore. I can’t recommend this one enough.