This year, I want to talk about some of the many types of fantasy you can find (I have a post about fantasy subgenres which can be found here). I think when people hear “fantasy”, their mind immediately goes to serious epics with swords, magic, and dragons. While I happen to love all of those things, there are many ways to tell a story. For the first of my Fantasy Focus series, I want to take a look at comedic fantasy.

Irreverent and witty, fantasy comedy often takes a humorous look at the fantasy genre, either creating new and entertaining fantasy worlds that focus on humor, parodying common fantasy tropes, or even poking lighthearted fun at specific works of fantasy.

Here is a list of some of side-splitting authors and some of the books they’ve written, in case you’re looking for suggestions on where to start! This is by no means anywhere close to a complete list of fantastic comedic fantasy authors that can be found, so please chip in with suggestions!

And keep your eyes open: there will be guest posts throughout the week featuring some of the greats in comedic fantasy.

Sean Gibson– The Part About the Dragon Was (Mostly) True; Dragons of a Different Tale (one of a collection of short stories)

Echo Shea– A Tinfoil Hat of My Own: A Tale of Friendship, Bikers, and Werewolves

I’m going to pull a fast one: I’ve already read (and loved) Duckett and Dyer: Dicks for Hire, so I’m going to review the second book in this series, Duckett and Dyer: The One-Hundred Percent Solution. Thank you to Storytellers on Tour for the opportunity to join in and rave about these books.

There might be some slight spoilers for Duckett and Dyer: Dicks for Hire in this review. Honestly, the books are so deliciously bizarre that you wouldn’t believe me if I gave you a play-by-play, although I’ll refrain. If you haven’t read the first book, you can find my review here).

Duckett and Dyer: The One-Hundred Percent Solution picks up pretty much right after the events of book one. After hopping through multiple universes, each one weirder than the last, life has returned to semi-normalcy for both Michael Duckett and Stephanie Dyer. Stephanie is attempting to ruin her detective business (totally on-brand for her), and Michael is working a soul-sucking job. There are a few changes, though: Michael has vowed to be a better friend to Stephanie. Stephanie, after a heart-to-heart with a future self, has made it her mission to protect Michael from any possible harm.

Unfortunately, Stephanie’s mission to destroy her own detective agency comes at a very bad time: Michael gets fired from his job. Fortunately, the detective duo finds themselves with something new to detect. They only get weird cases, and this one proves to be no exception.

The main characters are delightful. Michael has turned eye-rolling and long-suffering sighs into a fine art, and Stephanie is a walking Murphy’s Law. Of course there are many other fine characters, including an Illuminatist and an octopus-wearing cult member. It all makes sense in a zany sort of way.

The problem with this book is that it’s too freaking funny. I was forced to ignore any and all responsibilities to laugh my way through. It’s a real problem, I tell you. Also, I guffawed too loudly, almost spit my coffee across the room, and subjected my poor husband to snippets of the book without giving any context. Basically, this book turned me into an obnoxious jerk. I loved it. 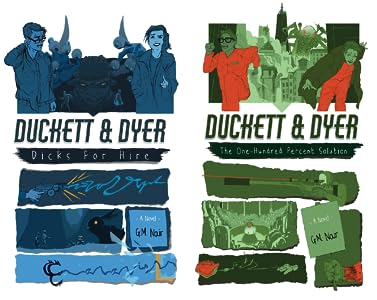 It wouldn’t be October if I didn’t talk about Bunnicula. This was one of my favorites growing up, and I’ve passed the enjoyment down to my oldest. I’m looking forward to the day when my youngest reads them too.

Bunnicula: A Rabbit Tale of Mystery is an easy chapter book. It’s told from the point of view of Harold, a pet dog. He’s shaggy, lovable, and rather gullible. He lives with his family, the Monroes, and a well-read cat named Chester. One night the Monroes go to a late-night showing of Dracula and bring home a surprise: a rabbit they name Bunnicula. Chester is convinced that Bunnicula is a vampire, sucking the juice from vegetables, and that only he can save the world from the evil machinations of the vampire bunny.

This series, of which Bunnicula is the first, is very special to me. I read it with my sister when we were younger and it was a wonderful way for us to bond. We’re still very close to this day, and we talk about those Bunnicula books from time to time.

This book is hilarious. I have no idea how the authors managed to come up with so many funny situations, but it had me in stitches when I read it, and my son reacted the same way when he read it. He’s reread the entire series several times, and will probably read them again this month.

This book is perfect for reading aloud (maybe a chapter or two a day?), or for readers just gaining confidence in their skills. My oldest and I took turns reading pages aloud the first time he experienced Bunnicula. It is one of my favorite memories. There are illustrations every few pages, but they are few enough that children are required to paint the pictures in their minds. I highly recommend this book, and October is the perfect time for a not-spooky “spooky” read. Enjoy!

The world’s finest parenting cartoon featuring ducks presents a comprehensive view of the early parenting years in all of their maddening cuteness and sanity-depriving chaos. In addition to dozens of previously unpublished cartoons, Fowl Language: Winging It is organized into 12 thematic chapters—including “Babies: Oh Dear God, What Have We Done?”; “Siblings: Best Frenemies Forever”; and “Sleep: Everybody Needs It, Nobody’s Gettin’ It”—each of which begins with a hilarious, illustrated 500-word essay. (taken from Amazon)

Thank you to Netgalley for providing me with this book, in exchange for my honest opinion. It will be available to purchase on October twenty second.

Who knew that it would be possible for me to relate so much to a duck? I struggle with reading graphic novels, but I love a good web comic. Back in the day, I used to read Penny Arcade, and comics along those lines. Then, one fated night, long after the cranky baby should have been sleeping, while surfing Facebook in an effort to stay awake myself, I stumbled across two panels of parental hilarity. Finally, someone got it. Being a parent is amazing, a miracle, and I love every moment of it…except the moments that I loathe.

Those times that everyone who’s well-rested claim I’ll look back on fondly? Yeah. This author nails my mixed feelings on those perfectly. The painful struggle that is toilet training? That’s in here too. That moment when I tear up because my oldest isn’t little anymore and why is he growing so freaking fast? Yep, this fowl little parent understands.

This collection of parenting comics is fabulous. If you’ve ever experienced the joys and trials of parenting, especially if you’re in the trenches now and need a little tongue-in-cheek humor, this book is for you.

Be aware that this fowl is a bit foul. He’s also funny and very real. Parents: pick this book up. When you’re done laughing, you’ll thank me. 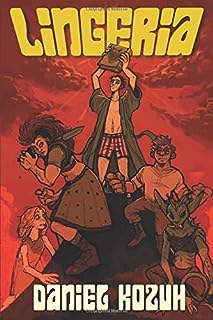 Thank you to the author for providing me with a copy of this book, in exchange for my honest opinion.

Norman is a successful author of Lingeria: a series of fantasy books that he’s written and now despises. He’s in a rut and incredibly unhappy. Imagine his surprise when he finds a door in his oven that leads into the fictional world he created-with one small exception. There happens to be an evil wizard who has seized control.

The fate of Lingeria is in the hands of a depressed author, a hobbit ripoff named Roe, and a ragtag group of equally unlikely heroes. What could go wrong?

Full of sarcastic humor, and a twist on every common fantasy trope, this book was a ton of fun. It moved quickly, taking me on a very bizarre and incredibly funny adventure. I found Norman’s discontent with the books he’d written incredibly entertaining.

I loved the situations that mark the “introduction” between Norman and his very real creations. One of them involves a broken nose; another a very disconcerting painting. This book takes every fantasy expectation, turns it upside down, and shakes its pockets for loose change. I highly recommend this one.

Possible trigger warning: There is a botched suicide attempt at the beginning, easily passed over by skipping pages 15 and 16.