Today I’m excited to be able to share the fantastic cover of The Children of Gods and Fighting and Fighting Men by Shauna Lawless. This book will be released internationally on the first of September.

Described as a mix between actual history and Irish mythology, this looks like it’s going to be amazing! Would you like to know more? Here’s the blurb:

“They think they’ve killed the last of us…

981 AD. The Viking King of Dublin is dead. His young widow, Gormflaith, has ambitions for her son – and herself – but Ireland is a dangerous place and kings tend not to stay kings for long. Gormflaith also has a secret. She is one of the Fomorians, an immortal race who can do fire-magic. She has kept her powers hidden at all costs, for there are other immortals in this world – like the Tuatha Dé Danann, a race of warriors who are sworn to kill Fomorians.

Fódla is one of the Tuatha Dé Danann with the gift of healing. Her kind dwell hidden in a fortress, forbidden to live amongst the mortals. Fódla agrees to help her kin by going to spy on Brian Boru, a powerful man who aims to be High King of Ireland. She finds a land on the brink of war – a war she is desperate to stop. However, preventing the loss of mortal lives is not easy with Ireland in turmoil and the Fomorians now on the rise…”

Wow! Are you ready to see the cover? Here it is:

Shauna Lawless is an avid reader of Irish mythology and folklore. As an Irish woman, she loves that Irish mythology has inspired so many stories over the years, however, she wanted to explore the history and mythology of Ireland in a more authentic way. She lives in Northern Ireland with her family. Follow Shauna on twitter @shaunaLwrites – or on her blog and website at www.shaunalawless.com 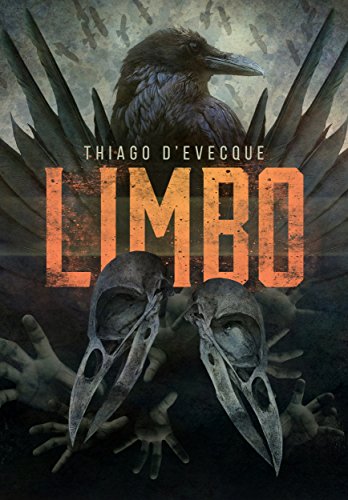 The Limbo is where all souls — human or otherwise — go to after dying. Some don’t realize where they are. Death is a hard habit to get used to. Gods and mythological figures also dwell in the plane, borne from humanity’s beliefs.

A forsaken spirit is awakened and ordered to dispatch 12 souls back to Earth to prevent the apocalypse. Many don’t take kindly to the return. Accompanied by an imprisoned mad god, the spirit must compel them.

Each of the 12 unlocks a piece of the forsaken spirit’s true identity. Memories unfold and past wounds bleed again.

The journey will reveal buried truths about gods, angels, humanity, and the forsaken spirit itself. (taken from Goodreads)

Thank you to the author for providing me with this book in exchange for my honest opinion.

This book is so stinking creative! I saw “mad god” in the description, and was immediately interested. One thing I loved about this was the way the book reads like a puzzle. That sense of questioning transferred over from the main character to me, and I couldn’t stop thinking through what I thought the possibilities might be. I was surprised by the way things culminated as well, which is always cool.

At times, the book felt a bit too descriptive but the descriptions themselves were amazing. The author had such a fully realized view of every last detail, from the way things looked, to how they were formed. Just read this:

There was no space or time. I strode without leaving the place, while, in fact, everything around me arranged itself to look like I was moving. The setting gradually changed. Small pieces climbed up to my feet and descended from where the sky should be. As in a puzzle, these pieces fit together and shaped the surroundings. The ground floated in blocks until they glued together in a perfect picture, an impeccable union.

Oddly enough, another thing I really enjoyed was reading the notes afterward to see what myths and religions the author pulled from and took liberties with. It’s obviously a passion project, and reads well because of it.

It’s a quick read, and one that I suggest to those who like new takes on old myths, legends, and archtypes.

Alone with no memories of his past, James finds himself befriended by a hunter and his wolf companion. The Black Order has taken James in and made him part of a team of hunters. James, Chase, and Ulf fight off enemies in epic battles of will, mystical powers, and enchanted ancient weaponry to keep humankind safe from supernatural beings who would destroy it. Along the way, James discovers a dark secret about himself as his memories return. (taken from Amazon)

This book was provided by the author, in exchange for my honest opinion. It’s available for purchase now.

First of all, I was excited to read a book with a unique twist on Greek mythology. For some reason, most mythology I’ve read this year has been Nordic so it was enjoyable to switch it up. Let me tell you, this is the most creative take on a mythos that I’ve read in a very long time.

Sometimes I find it difficult reading a main character who has no memories because I have a hard time finding that “window” into the world that a main character normally provides. However, it worked really well in this book. Because James didn’t remember much at all, the reader came by details of the world and story line naturally, without the dreaded “info dump”.

It was action-packed and a lot of fun. I don’t want to give away any of James’ secrets, but I didn’t expect many of them. This is an entertaining, unique read, and highly enjoyable.