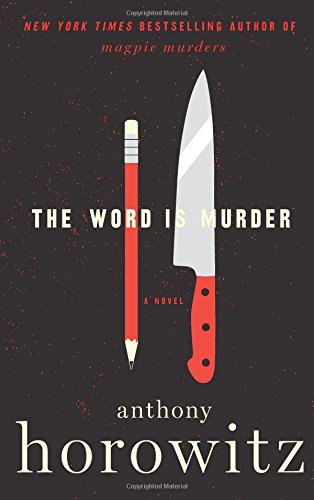 One bright spring morning in London, Diana Cowper – the wealthy mother of a famous actor – enters a funeral parlor. She is there to plan her own service.

Six hours later she is found dead, strangled with a curtain cord in her own home.

Enter disgraced police detective Daniel Hawthorne, a brilliant, eccentric investigator who’s as quick with an insult as he is to crack a case. Hawthorne needs a ghost writer to document his life; a Watson to his Holmes. He chooses Anthony Horowitz.

Drawn in against his will, Horowitz soon finds himself a the center of a story he cannot control. Hawthorne is brusque, temperamental and annoying but even so his latest case with its many twists and turns proves irresistible. The writer and the detective form an unusual partnership. At the same time, it soon becomes clear that Hawthorne is hiding some dark secrets of his own.(taken from Amazon)

Murder, and suspects, and mayhem- oh my! Have you every started a book or movie and thought, “This is so great, I love it,” only to have the ending dim everything? That’s what happened to me.

It started so well. Author Anthony Horowitz wrote himself into this mystery, and it was brilliant. It made for some funny scenes, and allowed the author to explain things without condescending to the reader. Anthony was almost a Watson character. I found it highly enjoyable.

The mystery itself was an interesting one. I thought I’d called whodunnit, but I was wrong. Unfortunately, I was wrong because the culprit came out of left field. I like mysteries where- if you go back through the book after everything has been revealed- you can see the clues cleverly hidden in the writing. This didn’t happen, and it was very disappointing.

Another issue I had was the whole “why I did it” monologue. Because the culprit made so little sense, there was almost half a chapter of exposition. Blah. See why the ending fell flat for me?

If you’re the sort of reader who can ignore a rather lousy ending if the rest of the book is enjoyable, then you might like this one. The characters are interesting, the narrative very well done. The meta aspect added an extra level of enjoyment. However, it wasn’t enough to make up for the ending in my mind. Bummer, man.