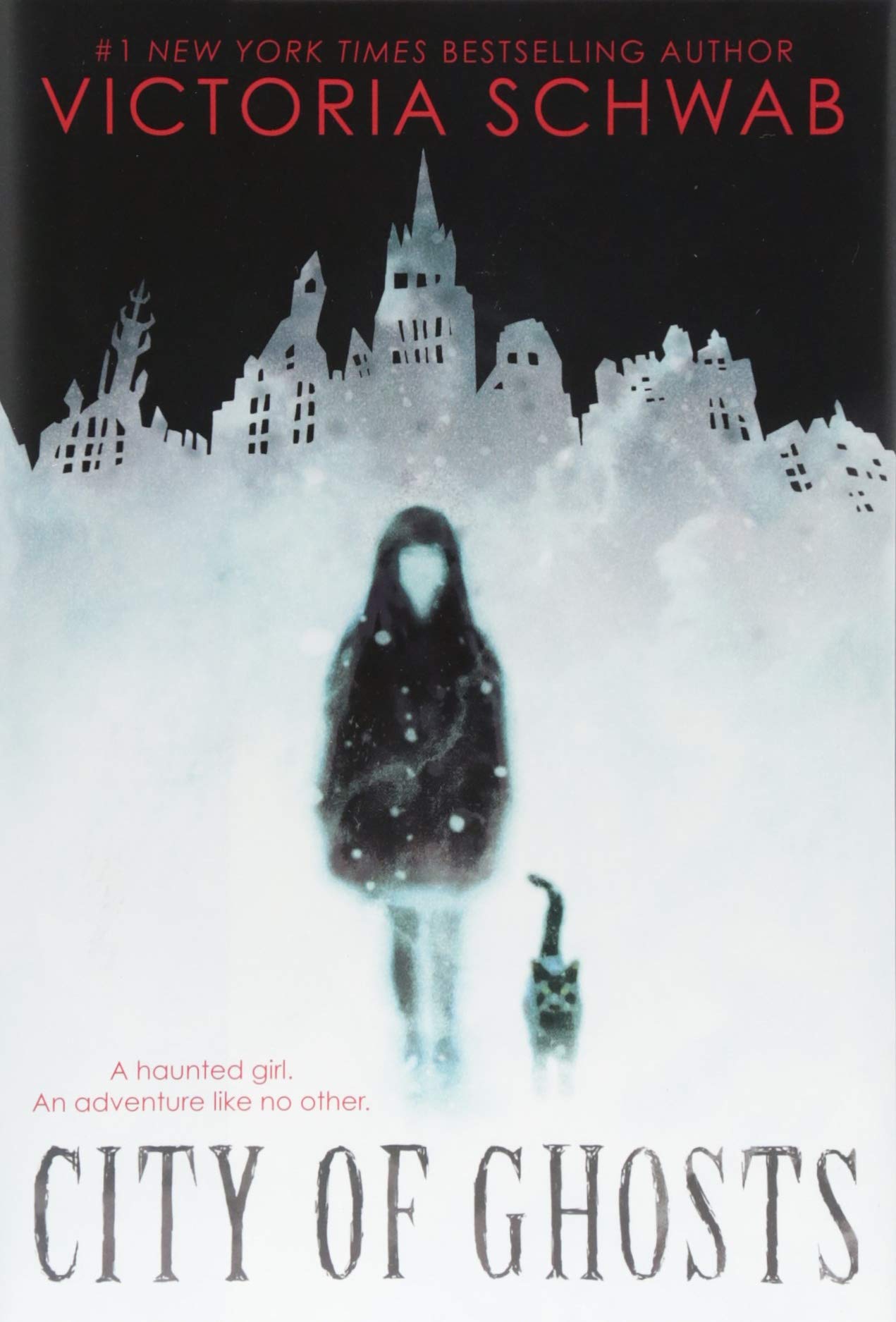 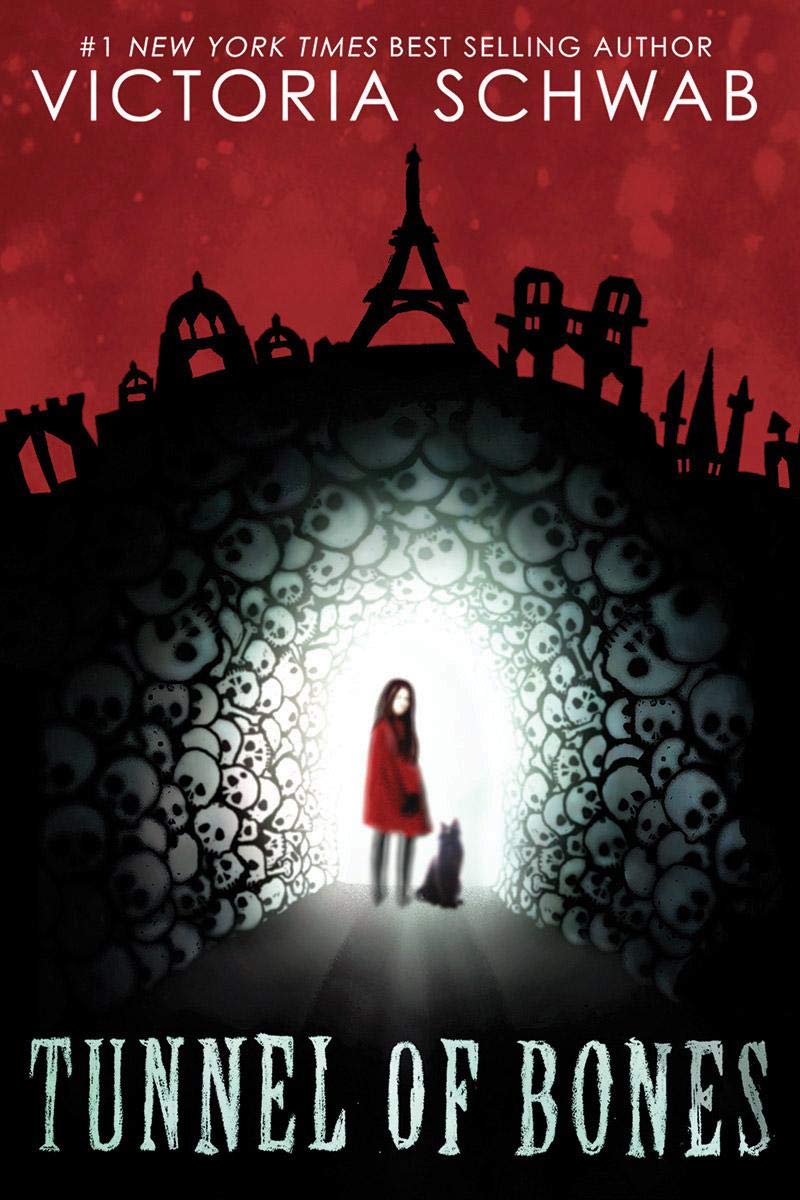 Ever since Cass almost drowned (okay, she did drown, but she doesn’t like to think about it), she can pull back the Veil that separates the living from the dead . . . and enter the world of spirits. Her best friend is even a ghost.

So things are already pretty strange. But they’re about to get much stranger.

When Cass’s parents start hosting a TV show about the world’s most haunted places, the family heads off to Edinburgh, Scotland. Here, graveyards, castles, and secret passageways teem with restless phantoms. And when Cass meets a girl who shares her “gift,” she realizes how much she still has to learn about the Veil — and herself. (taken from Amazon)

I’ve read some excellent reviews for these books lately, so when I saw them at the library, I had to snag them. After reading them, I can see why both books are so popular. Victoria Schwab is an excellent writer, and is able to effortlessly suck the reader into the world she’s created.

These books follow Cassidy, a girl who sort-of briefly died. She was saved by a ghost who has become her best friend. Now she can see ghosts and is able to cross the veil between the living and the dead. Her parents, who oddly enough host a ghost-hunting show despite not believing in ghosts, have decided to travel to “most haunted places,” with Cassidy, her ghostly bff, and their cranky cat in tow.

In the first book, they go to Edinburgh. There, Cassidy meets a girl named Lara who has the same ability she does. Lara informs Cassidy that they have a responsibility to reap the ghosts, basically sending them “on.” Cassidy unfortunately catches the attention of a very powerful and extremely angry ghost. Will she survive the encounter? Or will she end up truly dead?

I quite enjoyed the book. It felt like the first few episodes of that show Supernatural. It was episodic and a very good introduction to both the characters and the world the author has created. I found it highly entertaining, though lacking in some details I would have loved to had. For example, the Big Bad wasn’t as fleshed out (pun intended) as I was hoping. I loved the idea behind the villain and would have loved a bit more detail. However, Cassidy is a likable main character, and there’s a lot of potential in her ghostly buddy.

The sequel, Tunnel of Bones, started to see a bit more of a storyline. The foil in this book had more of a background, and this book focused more on solving the mystery behind all the ghastly, ghostly activity. I liked that aspect. Adding a bit of a mystery to the book made it much more interesting to me. Tunnel of Bones takes place in Paris, and the author made good use of the Catacombs. The final surprise has me very interested in seeing what comes next.

The best way I can describe these books is as Supernatural light. They’re entertaining, quick reads, that make for fun weekend reading. 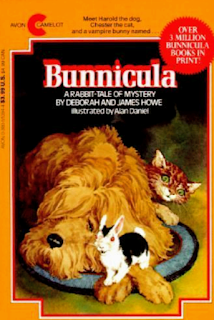 It wouldn’t be October if I didn’t talk about Bunnicula. This was one of my favorites growing up, and I’ve passed the enjoyment down to my oldest. I’m looking forward to the day when my youngest reads them too.

Bunnicula: A Rabbit Tale of Mystery is an easy chapter book. It’s told from the point of view of Harold, a pet dog. He’s shaggy, lovable, and rather gullible. He lives with his family, the Monroes, and a well-read cat named Chester. One night the Monroes go to a late-night showing of Dracula and bring home a surprise: a rabbit they name Bunnicula. Chester is convinced that Bunnicula is a vampire, sucking the juice from vegetables, and that only he can save the world from the evil machinations of the vampire bunny.

This series, of which Bunnicula is the first, is very special to me. I read it with my sister when we were younger and it was a wonderful way for us to bond. We’re still very close to this day, and we talk about those Bunnicula books from time to time.

This book is hilarious. I have no idea how the authors managed to come up with so many funny situations, but it had me in stitches when I read it, and my son reacted the same way when he read it. He’s reread the entire series several times, and will probably read them again this month.

This book is perfect for reading aloud (maybe a chapter or two a day?), or for readers just gaining confidence in their skills. My oldest and I took turns reading pages aloud the first time he experienced Bunnicula. It is one of my favorite memories. There are illustrations every few pages, but they are few enough that children are required to paint the pictures in their minds. I highly recommend this book, and October is the perfect time for a not-spooky “spooky” read. Enjoy!

There’s a murderer on the loose–but that doesn’t stop the girls of St. Etheldreda’s from attempting to hide the death of their headmistress in this rollicking farce.

The students of St. Etheldreda’s School for Girls face a bothersome dilemma. Their irascible headmistress, Mrs. Plackett, and her surly brother, Mr. Godding, have been most inconveniently poisoned at Sunday dinner. Now the school will almost certainly be closed and the girls sent home–unless these seven very proper young ladies can hide the murders and convince their neighbors that nothing is wrong. (taken from Amazon)                   This book is scandalously fun! The girls at St. Etheldreda’s School for Girls find themselves hiding a murder in an attempt to prevent themselves from being sent back to their respective homes. The girls have become incredibly close, and don’t want to be separated.

What makes this book such a blast to read are the clever, and ridiculously funny, characters. There’s “Dull” Martha, called that because she’s a bit of a spaz; “Pocked” Louise, the “scientist” of the group; “Dear” Roberta, so called because she’s such a sweetheart; “Disgraceful” Mary Jane, who has a penchant for flirting; “Stout” Alice, loyal friend; “Dour” Elinor, who was a little like Wednesday Addams dialed down; and “Smooth” Kitty, the leader of their little collective. While that’s a huge group of important characters to remember, their individuality made it easy to keep track of who was who.

Dour Elinor was my favorite character. Her doom and gloom attitude, not to mention her love of gothic literature, made her so much fun to read! I also enjoyed Stout Alice, although I felt bad for the situations she got pushed into. They were hilarious situations, though.

The way things quickly snowball, and the ridiculous events that kept escalating were incredibly entertaining. This book is a fast-moving romp, one that’s perfect for middle-grade readers, or for anyone who wants a giggle. 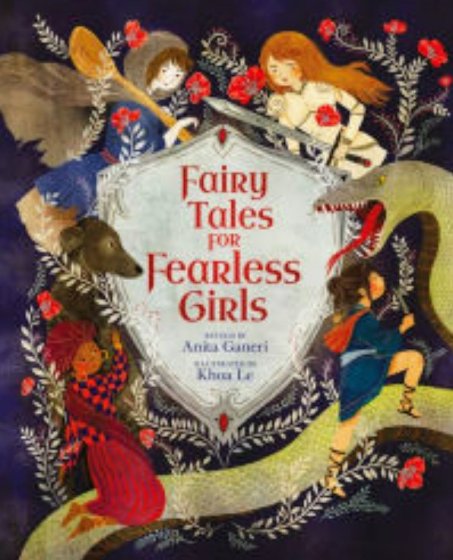 This inspiring collection of 15 stories from around the world showcases narratives that celebrate strong, independent women. These heroines aren’t reduced to being wives or witches! They run free and possess the qualities we would hope for in our daughters and friends: self-confidence, strength, wits, courage, fearlessness, and independence. They live freely, happily ever after, without restraint or narrowly defined roles. (taken from Amazon)

I adore fairy tales. I grew up on them, and firmly believe that you’re never to old for them. So, of course I was excited to read this collection. Some of the stories I already knew, such as Feng Mian, the Head of the Family, but many were new to me.

Alas, while I liked this book, I didn’t love it. I think the reason I enjoyed it but don’t feel the urge to gush is simply the arrangement of the stories in the book. The first two or three are incredibly similar, which diminished my enjoyment a bit. If they’d been spread out among other, different types of tales, I would have liked each one much better.

There were a few tales that I felt were much more interesting than others: Unanana and the Elephant being one. It follows a mom, first of all, and she’s both clever and determined. I could relate to her willingness to do anything to protect her kids. I also really liked Tatterhood and Dacia, which teaches a lesson about the importance of personality over looks.

Where this book really shines is in the gorgeous illustrations. After I finished the book, I went back through just to see them again. Khoa Le captured the feel of each story in a fascinating and original way.

Even though I didn’t love it, this book is still a worthy addition to any fairy tale collection.

Books and a little bit of life

An opinionated bookworm with a sweet tooth and a caffeine problem.

Welcome to a place for all of our bookish thoughts. 📖❤️

Wandering through life with a cup of coffee and a half opened book ...

Curled up with a good book